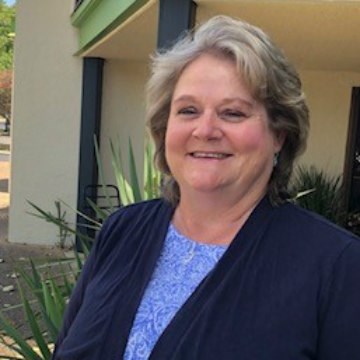 FAYETTEVILLE, Ark. – University of Arkansas alumna Tracy Henderson of Austin, Texas, says giving back is a great way to leave a legacy. Her planned gift commitment of $300,000 will create three new endowments at the university.

Henderson’s endowments will provide a scholarship for students who were placed in foster care during a portion of or throughout their childhood; funding for the Department of History in the Fulbright College of Arts and Sciences; and support for the University Libraries.

Henderson says one reason she decided to attend the U of A was because her father played football for the Razorbacks. She earned a Bachelor of Arts in history in 1984, minored in French and says she dreamed of working in international management one day. Henderson completed her Master in Public Affairs degree from the Lyndon B. Johnson School of Public Affairs at the University of Texas at Austin and then spent 28 years working with the state of Texas, including time with the legislature, before serving as chief financial officer of the Texas Health and Human Services Commission and later the Texas Department of Family and Protective Services. She now works part-time with the U.S. Treasury as an intermittent advisor.

“At this point in my career, I am doing international management,” she said, noting that she travels internationally for her job frequently. “And it’s what I set out to do all those years ago at the U of A. I grew up a lot during those four years in Fayetteville and started honing the tools to find myself.”

The Tracy L. Henderson Endowed Scholarship: Promoting Foster Care Success was inspired by her work with protective and regulatory services in Texas and a similar scholarship program that is offered to all residents of Texas.

“My time as chief financial officer for protective and regulatory services was a learning experience,” she said. “I have great admiration for people who work in this area. I wanted to be able to help former foster care children – whether traditional students or not – get a college degree. I was fortunate to graduate debt-free from college, and I want others to be able to do the same.”

Scholarship preference will be given to qualified students who were placed in foster care during a portion of or throughout their childhood and who are admitted as full-time students at the university.

“I met Tracy through the Austin Chapter of the Arkansas Alumni Association and could see right away that she was a loyal volunteer,” said Katy Nelson-Ginder, associate vice chancellor for development. “Her passion for the university and the Razorbacks was evident, and she showed great pride for her history degree and her family’s U of A legacy.

“Through her work with family and protective services, Tracy saw the potential of foster children who had overcome obstacles and wanted to continue their education. She is investing in them with this gift, so they’ll have the opportunity to attend college and aspire to their dreams. This just further demonstrates Tracy’s passion for helping others and her philanthropic spirit.”

The Tracy L. Henderson Endowment for History Research and Support will assist undergraduate or graduate-level students in the Department of History, where Henderson earned her bachelor’s degree.

Funding from the endowment will be used to cover costs related to conducting research, presenting research at conferences and associated travel or conference expenses.

“We are so grateful for Tracy’s support,” said Jim Gigantino II, professor and chair of the Department of History. “Not only is she helping our fantastic students succeed in their education, but she is an outstanding and inspiring example of what one of our graduates can and has achieved.”

“I spent a lot of time at Mullins Library as a history major,” Henderson said.

University Libraries Dean Dennis Clark said, “This endowment enables us to provide students and faculty with the collections and access essential for learning and research.”

Henderson is a life member of the Arkansas Alumni Association and is counted as a Thoroughred for her 30 years of consecutive giving to the university. She is also included in the Towers of Old Main, a giving society for the university’s most generous benefactors.