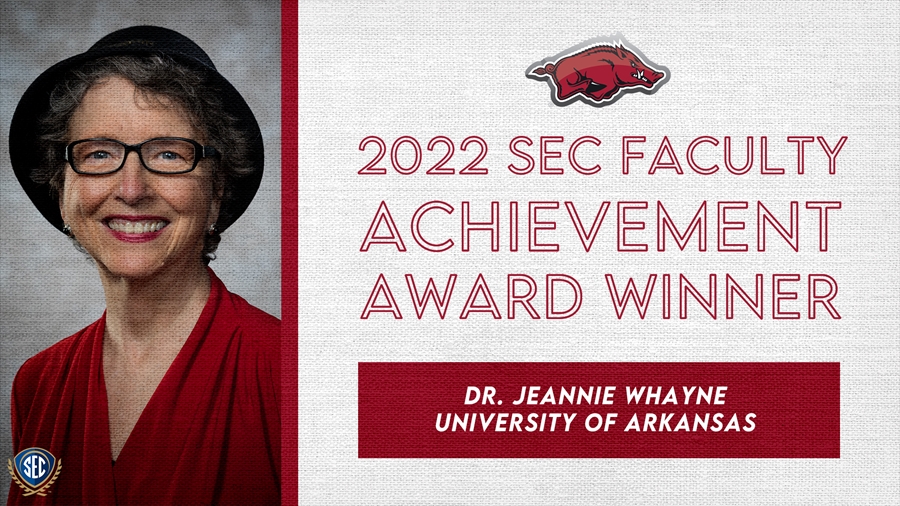 Jeannie Whayne, University Professor of History in the Fulbright College of Arts and Sciences, has been named winner of the 2022 SEC Faculty Achievement Award for the U of A, the SEC announced earlier this year.

Whayne is a specialist in agricultural and Southern history in the Department of History. Her research focuses on the lower Mississippi River Valley and the interplay of social and economic history with environmental change, agricultural development and race relations. Her most recent book, Delta Empire: Lee Wilson and the Transformation of Agricultural in the New South, explored the transformation of the plantation system in the 20th century South, concluding with observations about the emergence of portfolio plantations in the early 21st century.

Additionally, Whayne is a Fellow of the Agricultural History Society, a distinguished lecturer with the Organization of American Historians and a recipient of two lifetime achievement awards. She has also earned every teaching award bestowed by the university, and her commitment to the state includes teaching online licensure courses for educators and serving as president of a number of societies and associations.

"Dr. Whayne is widely respected among her peers, has long promoted student success and works diligently to increase access for underserved students," said Terry Martin, interim provost and vice chancellor for academic affairs. "Her scholarship has been critical in helping us understand one of the most sensitive and important areas of American politics and society. She sets the standard for insightful research, influential teaching and mentorship and service to the academy."

To receive an SEC achievement award the faculty member must have achieved the rank of full professor; have a record of extraordinary teaching, particularly at the undergraduate level; and have a record of research that is recognized nationally and/or internationally. University winners will receive a $5,000 honorarium from the SEC and will become their campus nominee for the SEC Professor of the Year Award, which will be announced later this month.

"We're just so proud of Jeannie and all she has accomplished both in and outside of the classroom, as a distinguished researcher and as a champion for our students," said Todd Shields, dean of Fulbright College. "Jeannie is a true powerhouse and it is an honor to congratulate her on this latest achievement."