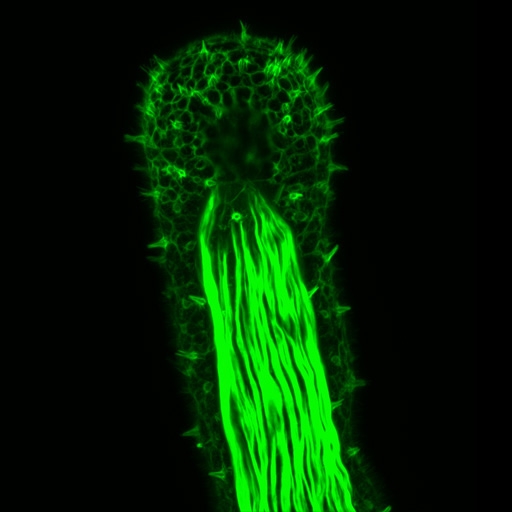 A fluorescent image of the anemone tentacle

An international team of investigators, including several researchers in biological sciences from the U of A, have published a paper that reports the discovery of a developmental gene linked to touch in the tentacles of sea anemones as well as hearing in humans. The gene, called pou-iv (pronounced “pow four”), is important for the development of auditory cells in the human inner ear.

Cnidarians, which include jellyfish, corals and sea anemones, are the closest living relatives of animals with bilateral symmetry, such as humans and other invertebrates. As such, cnidarians are useful for studying human evolutionary history because features shared by bilateral animals and cnidarians were likely present in our last common ancestor. A feature of note is the nervous system, and both bilaterians and cnidarians use similar sets of genes in neural development.

Auditory cells in the vertebrate inner ear that pick up vibrations to enable hearing are called hair cells. While they aren’t known to be able to hear, sea anemones have similar-looking cells on their tentacles — also called hair cells — that they use to sense the movements of their prey.

The researchers knocked out the pou-iv gene in a sea anemone and found that it resulted in abnormal development of tentacular hair cells, removing the animals’ response to touch. They also found that pou-iv is needed to turn on the polycystin 1 gene in sea anemones, which is required for normal fluid flow sensing by vertebrate kidney cells. Taken together, this suggests that pou-iv has a very ancient role in the development of touch sensation that goes back at least as far as our last common ancestor with sea anemones.

The U of A researchers are affiliated with the Nakanishi Lab, overseen by an assistant professor of biological sciences Nagayasu Nakanishi, who was a recent recipient of an NSF CAREER award for his work on the evolution of the nervous system. He is the corresponding author on the study.

“This study is exciting because it not only opened a new field of research into how mechanosensation develops and functions in a sea anemone, which has ample potential for novel and important discoveries (to be reported in the future),” Nakanishi said, “but it also informs us that the building blocks of our sense of hearing have ancient evolutionary roots dating back hundreds of millions of years into the Precambrian.”

The paper, titled “Cnidarian hair cell development illuminates an ancient role for the class IV POU transcription factor in defining mechanoreceptor identity,” was published in eLife. Additional authors included Ethan Ozment, Arianna N. Tamvacakis and Jianhong Zhou from the U of A. Pablo Yamild Rosiles-Loeza, Esteban Elías Escobar-Hernandez and Selene L Fernandez-Valverde from The Center for Research and Advanced Studies of the National Polytechnic Institute in Irapuato, Mexico, served as co-authors.