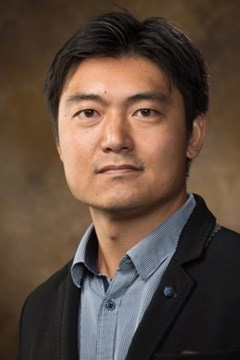 The National Science Foundation awarded Nagayasu Nakanishi, assistant professor of biological sciences at the U of A, with a prestigious Faculty Early Career Development award to support his research into how the nervous system emerged and diversified almost 600 million years ago.

The $1.15 million award will support Nakanishi’s research on how neuropeptides - short chains of amino acids - controlled the life cycle transition in sea anemones from larvae to juvenile form. He will specifically focus on how these neuropeptides controlled the timing of metamorphic changes.

In the next five to 10 years, he hopes to define how the nervous system in the last common ancestor of Cnidaria (which includes anemones, coral and jellyfish) and Bilateria (which includes worms and vertebrates) developed and functioned.

CAREER awards are the NSF's most prestigious award for early career faculty who have the potential to serve as academic role models in research and education and to lead advances in their department or organization. The awards are for five years and include teaching and public-outreach components. This award will help cement the foundation of Nakanishi’s career.

Beyond trying to gain insight into the evolutionary origin of the nervous system, about which little is still understood, Nakanishi noted three underlying goals of the grant in his winning proposal:

1) Integrate up to 175 undergraduate and graduate students into research over the five-year life of the grant.

3) Strengthen the neuroscience education and research capabilities of the U of A.

Ultimately, he hopes to establish a Center for Integrative Systems Neuroscience as part of growing and promoting one of the university’s signature research areas.

“This grant aligns with my career aspiration as an educator,” Nakanishi noted in his proposal. “I am motivated to teach the process of how scientific knowledge is generated, in addition to the knowledge itself, at the undergraduate level. I strongly believe that by understanding the process of generating scientific knowledge, a student will deepen an understanding of the knowledge itself and develop evidence-based critical thinking skills that are foundational to becoming a balanced, independently-minded citizen.”

This is Nakanishi’s second grant from the NSF. In 2020, he received a three-year grant of nearly $765,000 to study the evolution of neural differentiation mechanisms in animals. Nakanishi is the fifth faculty member of the Department of Biological Sciences to receive a CAREER award since 2017.