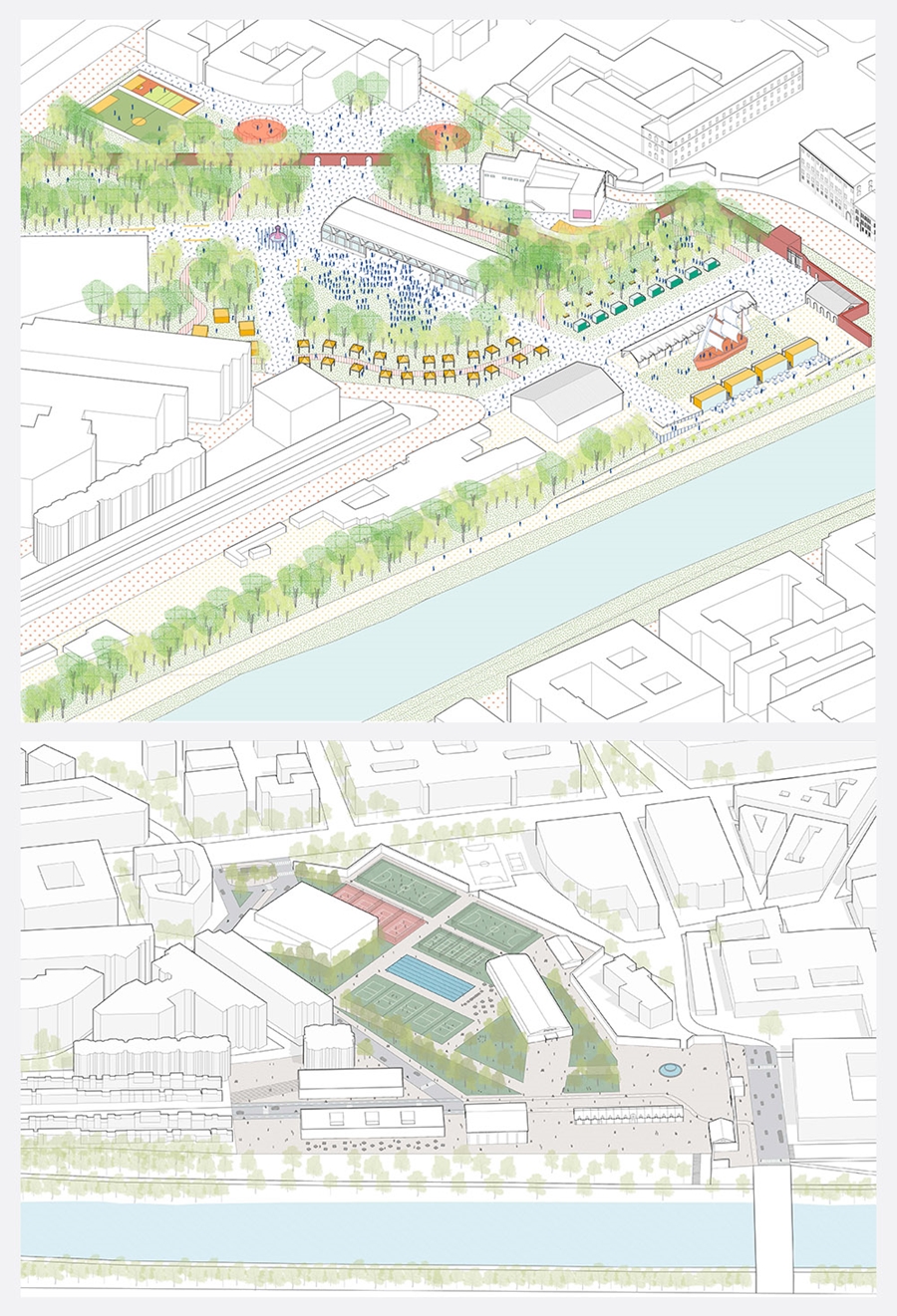 The designs "Social Parkway," at top, and "River Retail & Recreation," at bottom, took the top two prizes in the 2021-2022 International Competition presented by L'Art Urbain dans les Territoires. Both designs are by student teams in the Fay Jones School of Architecture and Design.

One finalist team, with Cody Denton, Sarah Wood and Sabrina Rodriguez, won the overall Prix International for their design, "Social Parkway: activer la vie sociale riveraine par les liens avec la nature." The other finalist team, with Beth Penrice, Lauren Miller and Taylor Deason, received the Mention Qualité Architecturale for their design, "River Retail & Recreation." All honorees will be celebrated at an awards ceremony in Paris on May 5, and each team will receive cash awards of 1,500 euros and 500 euros, respectively.

These fifth-year architecture students created the design work while studying abroad at the U of A Rome Center in Fall 2021.

"The success of our students in an international competition of this caliber further underscores the Rome Center's value to the Fay Jones School of Architecture and Design," said John Folan, professor and head of the Department of Architecture. "We are the only department of architecture in the United States to require study abroad. An invested commitment to that experience for all students is made easy due to the strength of faculty in Rome. There is collective gratitude to Francesco Bedeschi, Andrew Kranis and all architecture faculty at the Rome Center who provide an extraordinary educational experience for our students. The students and faculty have sustained success in this competition for several years. Heartfelt congratulations to these students for their success this year, and to the Rome Center faculty for continued excellence in mentoring them to create work warranting meritorious recognition."

This international competition is open to multidisciplinary teams of students and teachers from all schools in the living environment (architecture, town planning, landscaping, surveyors, geography, sociology, etc.). The theme for this year's competition was "Urban regeneration of the fringes of cities, towns and villages."

Through their designs, each team is charged with comparing the existing state and the projected state. This comparison takes the form of a graphic layout illustrating a program of intentions intended to improve the environment and the living conditions of the inhabitants. This method allows the quality of the proposals to be assessed and also sparks debate on the definition of urban art.

Andrew J. Kranis, LEED AP, FAAR, is Faculty of Architecture at the U of A Rome Center. He mentored these students in the Fall 2021 semester, and he introduced this competition to U of A architecture students back in 2012.

"This competition is a great way to begin the semester's studio work with a broad analytical exercise that allows students to engage with historic urban development, preservation, mobility and accessibility," Kranis said. "The prescriptive annual theme gives us important global issues to consider and a highly curated graphic format, allowing our work to be judged against entries from as many as 140 other participating countries."

This student competition, which began in the early 1990s, emerged from the seminar of a legendary French urban planner, Robert Auzelle. His pioneering work led to the creation of a state sponsored annual roundtable for French urbanism professionals, and in turn to a call for proposals from graduate and undergraduate institutions around the world, which has become the Concours International arturbain.fr, Kranis said.

Preliminary judging is done by the professional committee in France. Then, once finalists have been announced, it is up to the instructors from all participating institutions to evaluate the nine to 18 short-listed projects on the basis of architectural quality, respect for the environment and quality of social life. The numbers are tallied, along with an anonymous "internet jury" survey, to determine the overall Prix International and the winners in each of the three judging bases.

Kranis brought the competition to the attention of professors Francesco Bedeschi and Davide Vitali when he began teaching studio at the U of A Rome Center in 2012. They were very open to it and have joined him in offering the chance to compete to U of A students and affiliates at the Rome Center several times.

The Rome Center has never failed to reach at least finalist standing in all the years its students have taken part in the competition, Kranis said. This year is the first time the students have been cash award winners, plus they took the two top prizes.

"I was proud of all of the teams that worked on the urban design proposal in last semester's studio in Rome," Kranis said. "I believe it gave them all a firm grounding for the building design or adaptive reuse projects they completed in the second half of the course. It was up to the student teams to submit their entries to the competition — with translation into French, which we coordinated over their Fall Break — and a decision of many others to award them the prizes. So it's very much to the credit of our winners that they took the initiative to compete and were able to persuade the international committee and jurors with their projects."

The Prix International-winning design, also called "Social Parkway: community life through natural connection," addressed the intersection of the Aurelian Walls and the Tiber River. An area once vital for trade, it has become a place of physical and social boundaries, with historical structures laying in ruin and green spaces obscured by mismanagement and seas of pavement.

The design team chose to reprogram the Trastevere fringe, using nature as a connective tissue for healthy social living. Their proposal creates a more walkable community, minimizing the role of the vehicle. Obstructive structures are removed to maximize park space and redefine the attitude of pre-existing boundaries. Existing assets are given new life, creating safe spaces for social interaction and community gathering in a post-pandemic world.

For the "River Retail & Recreation" project, the design team focused on Porta Portese, a now secluded area of Rome that was once the heart of its maritime economy. Surface parking and rampant overgrowth have made this area uninviting and even dangerous, and the adjacent community has limited access to retail and recreation spaces and the Tiber River.

In their proposal, the design team focused on addressing the neglected historical landmarks, derelict architecture and lack of green space. By removing the derelict structures and replacing them with proper storefront structures for the retail district, they revitalized the area into a more approachable and functional space. They also replaced inactive, impermeable surfaces with more enriching landscapes to create an outdoor space where a variety of activities may take place — vital for a healthy lifestyle in a post-pandemic world.