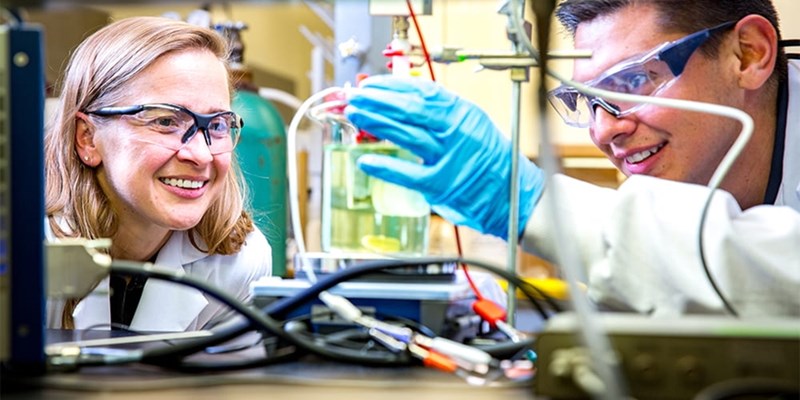 FAYETTEVILLE, Ark. – Lauren Greenlee, associate professor of chemical engineering at the University of Arkansas, received a $750,000 award from the Department of Energy to investigate the chemical and electronic structure of iron and oxygen atoms.

The project will provide a scientific basis for further alkaline electrocatalysis research, leading to the design and development of catalysts to improve battery materials, polymer conversion and recycling, and water treatment.

Greenlee’s research focuses on water chemistry, nanomaterials and electrochemistry. A branch of physical chemistry, electrochemistry is the study of the relationship between electricity and chemical change, including reactions and outcomes derived from the application of one to the other.

Greenlee has extensive experience with electrocatalysts and electrochemical applications for industry, including developing alternative methods for wastewater treatment and producing ammonia and commercial fertilizer. For this project, Greenlee and co-investigator Clemens Heske, professor of materials chemistry at the University of Nevada, Las Vegas, will use X-ray spectroscopy to describe the electronic and chemical structure of iron oxygen atoms, including formal state of oxidation and the extent of chemical mixing, or covalency, with several other iron oxidation states. They will also determine the electronic and chemical structure for iron, oxygen and nickel as an electrocatalyst material. Finally, the researchers will develop a computational framework describing these various structures.

The award is part of the U.S. Department of Energy’s $21 million in funding for 31 research projects under the federal Established Program to Stimulate Competitive Research, or EPSCoR. EPSCoR is designed to build capabilities in underserved regions of the country that will enable them to compete more successfully for other federal research and development funding.

The EPSCoR program enables university researchers from EPSCoR states to partner with researchers at the Energy Department’s national laboratories. Researchers focus on topics of common interest, including fundamental research in chemistry and materials science, advancing solar energy and battery technologies, studies in particle physics and other areas.