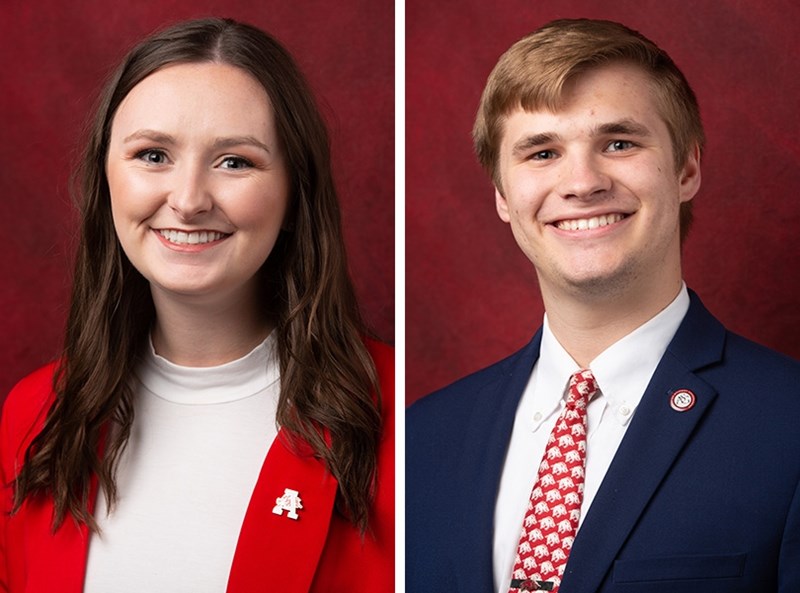 The award was established in 1965 by the Arkansas Alumni Association to recognize a senior male and female student who each exhibits outstanding academic achievement, leadership skills and co-curricular activities.

“The Razorback family has the best traditions, opportunity after opportunity, and incredible resources, but what makes it exceptional is the community,” said Pinkerton. “That sense of community is what drives a person to run across a crowded airport and shake the hand of someone wearing Razorback apparel. I am so thankful for this university and everything it has done for me.”

“I’ve learned that being a Razorback means more than shared experiences,” said Truitt. “A Razorback has the qualities that we all desire: toughness, dedication, loyalty, and fearlessness. I learned to be tough through watching a classmate’s mom pass away and seeing her continue through school and achieve amazing things despite her loss. I learned dedication by watching my professors give their time and hearts to myself and my peers in each class I attended. I learned loyalty as I served on the Student Alumni Board, which provided a front-row seat to how alumni from all over the world work to make this university the best it can be. I learned to be fearless by walking on Senior Walk each day and seeing thousands of names that have come before me. Those names were not afraid to stand up for what they believed in, be the first in their family to go to school, or even publish research that would change the world forever.”

For the past five years, recognition has included a spring awards celebration known as the Cardinal & White Banquet. This year, plans were adjusted as the staff of the Arkansas Alumni Association worked with the office of University Relations and Chancellor Joe Steinmetz to honor our outstanding seniors with a virtual Cardinal and White Celebration which premiered on the association’s YouTube channel on April 30 and is available for viewing at the Arkansas Alumni website.

During the celebration, the Arkansas Alumni Association recognized the Class of 2020 Razorback Classic Award winners. The class represents the top 10 female and top 10 male graduating seniors at the University of Arkansas for the academic year.

Students were selected from among 71 Seniors of Significance honored recently for academic excellence, demonstrated leadership and co-curricular involvement.

At the conclusion of the celebration, Chancellor Joe Steinmetz announced that Pinkerton and Truitt had been selected as the Senior Honor Citation recipients for 2020.

As the winners of the Senior Honor Citation, Pinkerton and Truitt received life memberships in the Arkansas Alumni Association and permanent recognition on a plaque at the alumni house. They will be invited back to campus to represent their class at events, including speaking at their Senior Walk dedication.

Jared Pinkerton was the 2019-2020 student body president. In addition to his roles with the Associated Student Government, he was the founder and president of the Theta Chi Fraternity and a distinguished delegate of the Model United Nations in Xi’an, China, among other roles.

“Being a part of the Razorback family means you are getting a community that will be your support system,” Pinkerton said. “an identity that you will wear with a sense of pride, and a place to call home on the Hill.”

“I have never met a student as dedicated, determined and enthusiastic as Jared,” said mentor PJ Martinez. “He truly embodies the characteristics of a leader. He serves well, listens closely and advocates for those around him. He sought to unite all organizations across campus, and he successfully created innovative initiatives that boosted the university’s morale. I have been impressed with the way he creates relationships with students and administrators.”

Kate Truitt held leadership roles across campus including serving as president of the Gamma Nu Chapter of Kappa Kappa Gamma and vice president of Board Development for the Student Alumni Association. She has been a peer mentor and has held internships with PriceWaterhouseCoopers (PwC) and Walmart Accounting & Finance Development Program.

“I think it is safe to say that Kate intentionally chose to leave our university better than she found it, giving more than she took,” said mentor Molly Rapert.

“I am very thankful to have attended a school that not only pushes me to be a better student but also to be a better person,” Truitt said. “Regardless of background, age, or culture, the Razorback family is a global unit that comes together as one.”