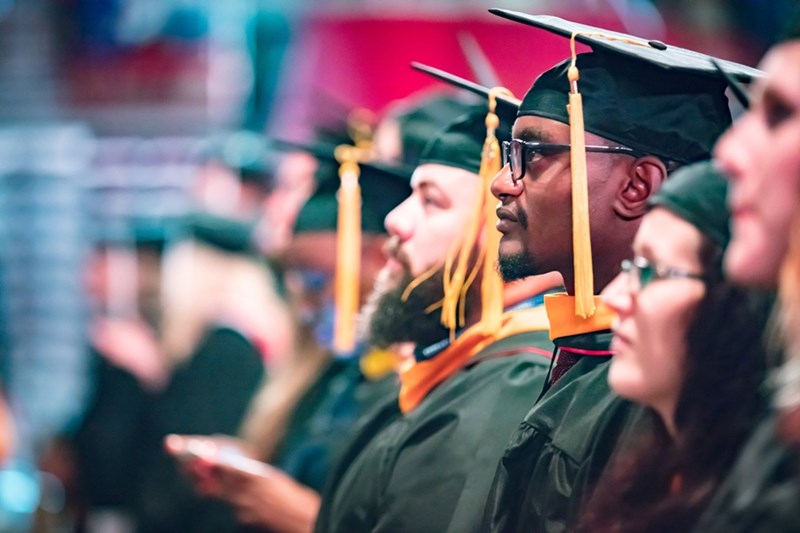 FAYETTEVILLE, Ark. – Students who originally hoped to walk at the 2020 Spring Commencement before it was postponed due to the COVID-19 crisis, now have the option to attend Fall Commencement ceremonies instead.

Spring graduates are invited to participate in a combined graduation weekend in conjunction with the fall graduation set for Saturday, Dec. 19, 2020.

Students who had applied to graduate this spring will be contacted by the registrar's office regarding their attendance at fall commencement. A message will go to the student's university email account and will be posted on the University of Arkansas Graduation app, which can be downloaded on Google Play or Apple devices. Students will be asked to respond regarding their plans to attend.

Depending on the number of spring graduates interested in participating in the fall graduation ceremonies, an additional ceremony could be added on Friday, Dec. 18, 2020.

The university will also recognize spring graduates online in May as part of an enhanced website. The same commencement info that would have been printed in the graduation program next to each recipient's name will be included as a part of an online directory currently being developed. Additional details will be released in the coming weeks.

Students who plan to graduate in spring 2020 still need to complete all degree requirements no later than May 7. In addition, graduate students must submit their thesis or dissertation by May 1. The submission process has been modified to allow for digital submissions but the deadline has not changed.  Graduate students can see procedure changes on the graduation checklist for spring 2020.

As a World War II veteran, a former chairman, president and CEO of a major energy corporation, a former University of Arkansas Board of Trustees member and chair of the board, as well as a philanthropist, Charles Scharlau will be the honorary degree recipient for the Spring 2020 Commencement.

Scharlau, a native of Mountain Home, helped build Arkansas Western Gas into the Southwestern Energy Corp. we know today. Scharlau was a major part of transforming Southwestern Energy from a small distribution company to one of the nation's leaders in exploration and natural gas providers.