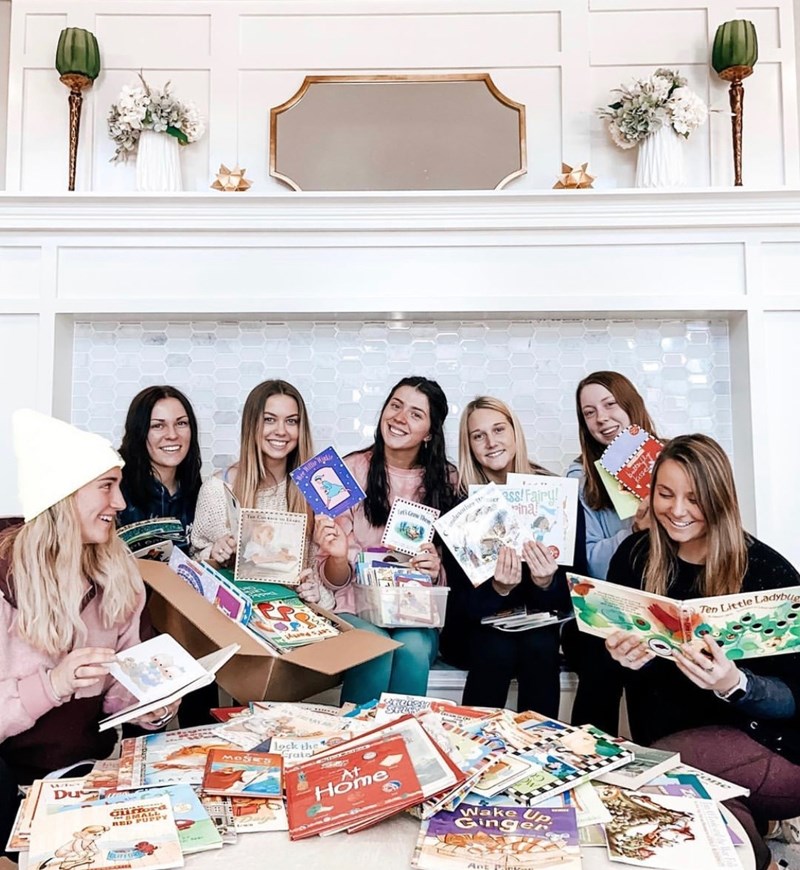 This February, the Panhellenic Council celebrated Panhellenic Scholarship Month, honoring the community's academic achievements and goals. The month was packed with events: a book drive, banquet, competitions, and more.

Kara Casey, vice president of Scholarship and Educational Programming, chose the theme "Better Together" to promote academic success and unity in the council.

To kick off the month, chapters painted banners highlighting the theme and hung them outside their houses. Throughout February, Maple Street was lined with eye-catching, colorful banners to signify unity and scholarship. Casey explained, "This theme unified the Panhellenic community, not only within their chapter, but the whole university."

Later in the month, Casey hosted "Chapter Feud," an educational program during which chapters raced to answer university-related questions. Casey discussed its impact, "This program reminds women of the excitement of discovery within expanding their knowledge." The program proved a hit among Greeks with 55 participants and over 100 audience members.

Scholarship Month also celebrated individual members for their academic successes. At the end of the month, Panhellenic recognized 44 women at Noodles Italian Kitchen. The night included dinner and an awards ceremony. "The goal was to make these women feel cherished and significant for their outstanding diligence towards their academic careers," Casey noted.

While each of these events reached record-breaking attendance and promoted many scholastic achievements, the largest event focused not just on the Panhellenic community, but on the entire Northwest Arkansas community.

Throughout the entire month, chapters collected children's books for the annual Scholarship Month Book Drive. Panhellenic donated the books to Washington Elementary and many schools in the Arkansas Delta.

"This year we were able to donate a total of 5,713 books to build up future leaders by providing them with resources to further grow their education," Casey said.

February proved to be a productive month for the Panhellenic council, one that Casey considers to have boosted "an atmosphere of engagement within the pursuit of academic success."

Assistant Director Carissa Kelly agreed, "Panhellenic was very excited for Scholarship Month. Right from the start, chapters went above and beyond to show their commitment to Scholarship Month. We had a successful month due to this enthusiasm."