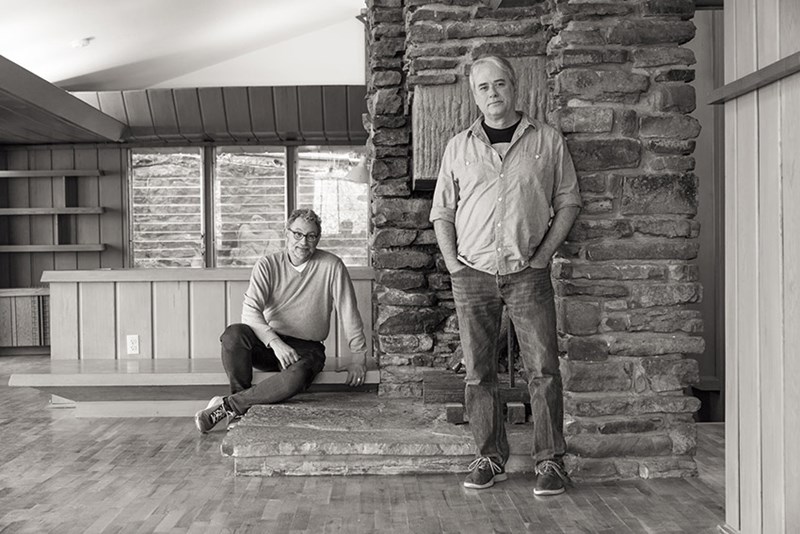 Professors Greg Herman, left, and David Fredrick are shown inside the Fay and Gus Jones House in Fayetteville.

This program is free and open to the public, and no registration is required.

Their presentation will begin with a short overview of the work of Fay Jones. Then, they will focus on the documentation and representation of the Fay and Gus Jones House in Fayetteville, built in 1956, that has been prepared by an interdisciplinary team of U of A faculty, staff and students. Team members are from the Fay Jones School of Architecture and Design and the Tesseract Center for Immersive Environments and Game Design, which is part of the J. William Fulbright College of Arts and Sciences.

The professors will highlight the work completed on an interactive kiosk, which currently is on display in the library's main lobby. This "A House of the Ozarks" kiosk allows the public to explore the work of Fay Jones generally, and the Fay and Gus Jones House specifically, as well as the work of several other mid-century contemporaries of Jones in Northwest Arkansas, in an effort to highlight the rich architectural heritage of the region. Both the kiosk project and the professors' presentation aim to foster a deeper public understanding of the enduring themes expressed in the mid-century modern houses of Fay Jones.

Jones, an Arkansas native, U of A alumnus and long-time Fayetteville resident, was a world-renowned architect and recipient of the American Institute of Architects Gold Medal. He was also a long-time architecture professor and first dean of what is now the Fay Jones School of Architecture and Design, named in his honor 10 years ago.

Jones is renowned for an architectural approach that combined simple elements - stone, wood and glass - into an expression of great richness, while retaining the organic principles and simplicity of expression derived from his mentor and early employer Frank Lloyd Wright.

Jones' own house in Fayetteville was the first project he completed at the start of his independent professional career. Referred to as "Fay's Experiment" by his wife, Gus, the house includes many of the signature components and details that would be refined in the architect's more mature work, and thus serves as a critically important sampler of his design intentions.

Jones' Thorncrown Chapel in Eureka Springs, completed in 1980, has been listed by the AIA among the most significant buildings of the 20th century.

Herman's recent teaching and research have included a concentrated focus on the work of Fay Jones. In 2010, Herman's students garnered first place in the Peterson Prize from the Historic American Buildings Survey (HABS) in 2010 for their documentation of the Fay and Gus Jones House. Since that time, Herman has continued to work with students on the documentation of mid-century modern architects in Fayetteville for HABS. Herman's ongoing work on Fay Jones has attempted to position the architect's work within the milieu of mid-century modern architecture in the United States generally, and in Arkansas specifically. Herman has presented several papers on the work of Jones and his contemporaries; his essay titled "The Paradigm Shift" was published in Shadow Patterns (University of Arkansas Press, 2017), a collection of critical essays on the work of Jones.

Fredrick works at the intersection of higher education and video games, with research interests that include Roman art, architectural history, spatial cognition and the use of machine learning and neural networks in art history. As director of the Tesseract Center, he manages the production of video games, interactive visualizations and virtual reality (VR) content for teaching and research. On desktop, mobile, web-based and VR platforms, Tesseract projects address navigation and behavior in ancient Pompeii, neuroscience and the nature of consciousness, the Civil Rights movement, architectural history and urban development in Rome, and Native American ceremonies at Spiro Mounds. With funding support through a U of A Chancellor's Innovation and Collaboration Fund grant, Tesseract is currently working with Crystal Bridges Museum of American Art to develop an immersive narrative application for Francis Guy's painting Winter Scene in Brooklyn, for the Oculus Quest and the 3D web. A virtual gallery application (Gallery 5) developed with Crystal Bridges received a Golden Muse Award from the American Alliance of Museums in 2015.

Those who are unable to attend this event in person can view it live and via replay on the library's Livestream page.

In addition, more details about the professors' work can be found in this episode of the Short Talks From the Hill podcast, produced by the university.