'A House of the Ozarks'; New 'Short Talks' Explores Arkansas' Most Important Architect

The architecture of Fay Jones endures. Though examples of his commercial and residential work pervade Northwest Arkansas, where he taught and practiced for more than 40 years, Jones's name is most often associated with his chapels, Thorncrown outside Eureka Springs and Mildred Cooper in Bella Vista.

But 25 years before the construction of Thorncrown Chapel — and 30 before the Mildred Cooper Chapel — Jones designed and built his first structure in Northwest Arkansas, a residence, his own, on a Fayetteville hillside. Jones lived in the house with his wife Gus until he died in 2004. In 2015, after Gus Jones died, the university acquired the home.

"Fay Jones … is certainly the most important architect ever produced by the state of Arkansas," says Greg Herman, in the latest edition of Short Talks From the Hill, a podcast of the University of Arkansas.

Herman is a professor of architecture and director of the Fay and Gus Jones House Stewardship, which has been responsible for renovating and curating the Jones home. To expand this project and introduce Jones's work to a broader audience, Herman has collaborated with David Fredrick, professor of classics in the J. William Fulbright College of Arts and Sciences and director the Tesseract Center for Immersive Environments and Game Design, which produces immersive, game-based content, 3D visualizations and other applications for university classes and research.

With an $86,000 grant from the Chancellor's Innovation and Collaboration Fund, Herman and Fredrick embarked on "A House of the Ozarks," a virtual tour of the Jones home. Through 3D interactive visualization, users can explore the grounds and interior of the home while also accessing documents related to its design and construction. As Fredrick says in the podcast, the technology allows users to "see the house in its landscape and spin it around, take the roof off and see how the first floor and second floor relate."

Short Talks From the Hill highlights research and scholarly work at the University of Arkansas. Each episode features a university researcher discussing his or her work. Thank you for listening! 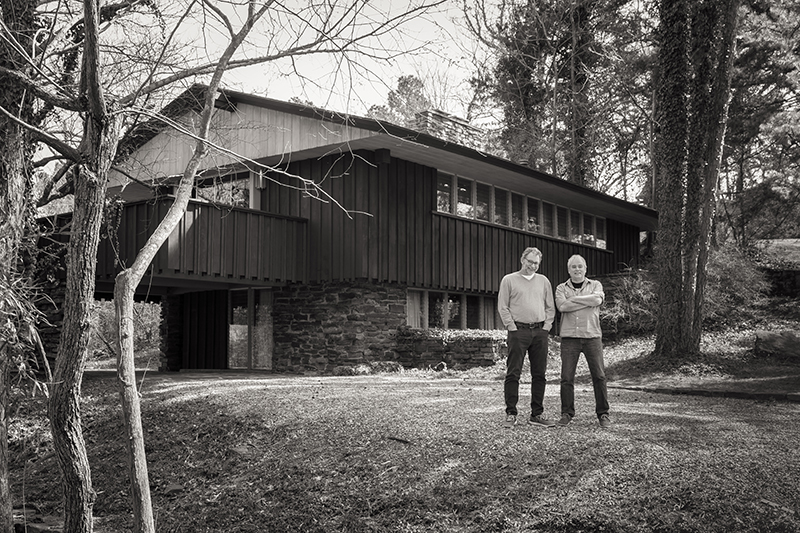 Professors Greg Herman and David Fredrick in front the Fay and Gus Jones Home in Fayetteville.