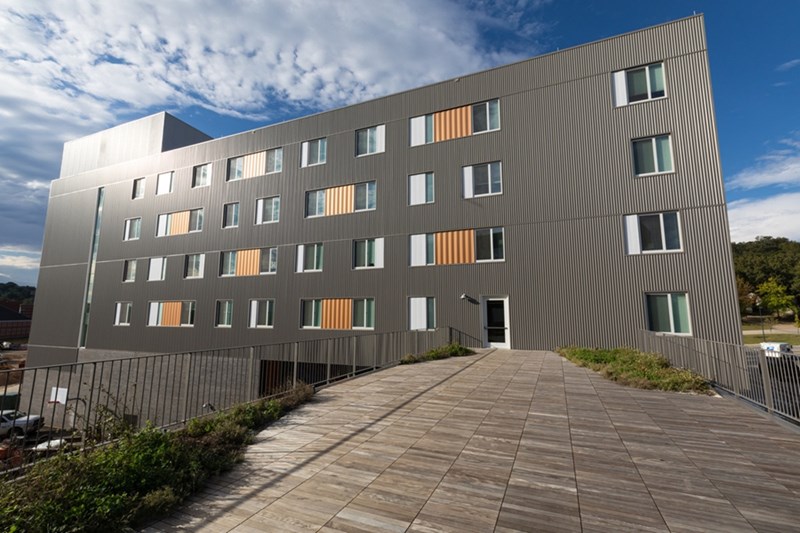 The campus community is invited to the dedication of Adohi Hall, the University of Arkansas' newest residence hall, on the southern end of campus.

Scott Flanagin, communications director for Student Affairs, will be the master of ceremonies. Speakers include:

Light refreshments and tours of the common and residential space will be provided.

Staff parking can be found west and south of the building in Lots 62 and 56d, respectively.

Adohi Hall, made up of three buildings, opened this August. The $79 million project adds an additional 708 new beds on campus.

"Adohi" is a Cherokee word that means "woods." It was chosen in consultation with members of the Cherokee Nation. The name references the use of timber in the design and honors and remembers the Native American people who passed near the area during the Trail of Tears period.

There is a marker south of the hall that recognizes the passage of those native people as they traveled to Oklahoma.

Adohi is the only residence hall project in the United States to use cross-laminated timber and the first multi-story advanced-timber structure in Arkansas. This construction material, made up of bonded layers of wood, creates much less waste than materials like concrete or steel.

It is also the site of the Adohi Creative Community, made up 10,000-square-foot space in the southernmost building, Adohi South.

The creative community is open to residents living in the hall and designed to enhance their academic experience by giving them access to tools and training in the creative arts.

The five Living Learning Communities in Adohi Hall are:

The event will be broadcast live on the Division of Student Affairs' Facebook page.

Adohi Hall is the first new residence hall to open on campus since Founders Hall in 2013. The Maples neighborhood, including Maple Hill East, Maple Hill South and Maple Hill West, were constructed in two phases between 2007 and 2008.

The indigenous history of the land our campus sits on goes back more than 13,000 years, and across that expanse of time, many successive groups lived on and created sacred legacies for this area. We know virtually nothing about their languages or by what names they referred to themselves.

By the time people of European origin arrived and began to write down their own observations and record the stories Native Americans related about their histories, the Osages had long been using this area as a source for food and other commodities, though their villages occupied lands farther north in Missouri.

During the early 19th century, Cherokees living in the Arkansas River valley also began to use this area, and then during the later 1830s and early 1840s other Cherokee groups removed from south Appalachian homelands passed through during the forced removals known as the Trail of Tears.

About University Housing. University Housing is a department within the Division of Student Affairs serving a residential community of around 6,200 on-campus students. More than 200 students find employment opportunities with University Housing each year. We offer educational programs that support the success of students and services that help students focus on academics at the University of Arkansas. Living on campus starts with a housing contract.

About the Division of Student Affairs. The Division of Student Affairs supports students in pursuing knowledge, earning a degree, finding meaningful careers, exploring diversity, and connecting with the global community. We provide students housing, dining, health care resources, and create innovative programs that educate and inspire. We enhance the University of Arkansas experience and help students succeed, one student at a time.