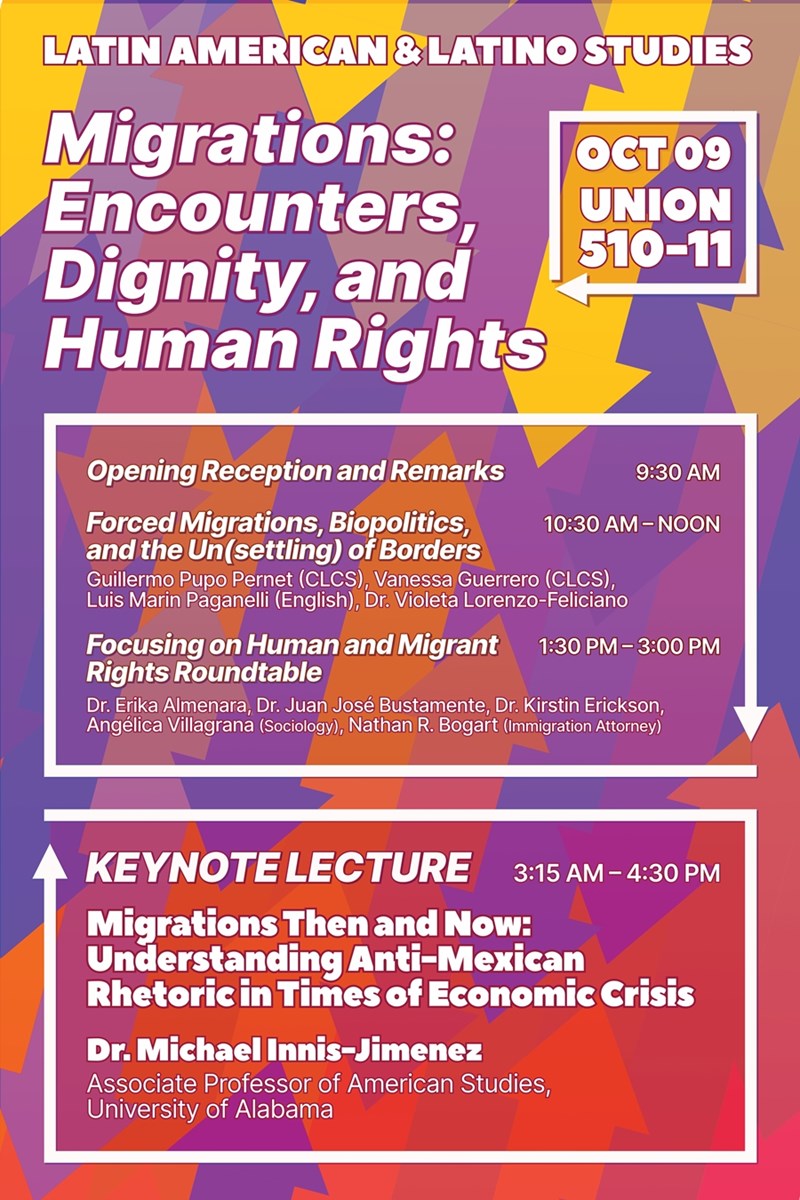 The symposium offers an opportunity for faculty, staff, and students to learn more about the research mission of the LALS program, including the breadth of scholarship and areas of study of the program's faculty, which include, but are not limited to: border studies, colonial/postcolonial studies, cultural studies, ethnic studies, gender and sexuality studies, (im)migration, Latin/o American politics, literary studies, pre-Colombian Mesoamerican art, religious studies, violence studies. This event is free and open to the public.

The symposium theme for this year is "Migrations: Encounters, Dignity, and Human Rights."

The opening reception at 9:30 a.m. will be followed by a graduate student panel at 10:30 a.m. on "Forced Migrations, Biopolitics, and the (Un)settling of Borders" featuring Comparative Literature and Cultural Studies' Guillermo Pupo Pernet and Vanessa Guerrero, Department of English's Luis Marin Paganelli, and Violeta Lorenzo-Feliciano of the Department of World Languages, Literatures and Cultures.

The afternoon session will consist of a roundtable at 1:30 p.m. dedicated to the issue of migrant and human rights with WLLC's Erika Almenara, Department of Sociology and Criminology's Juan José Bustamante and Angélica Villagrana, immigration attorney Nathan R. Bogart, and Department of Anthropology's Kirstin Erickson.

The symposium will conclude with a keynote talk at 3:15 p.m. entitled "Migrations Then and Now: Understanding Anti-Mexican Rhetoric in Times of Economic Crisis" by Michael Innis-Jiménez, associate professor and director of graduate studies in the Department of American Studies at the University of Alabama.

Innis-Jiménez's research interests include Latinos/Latinas in the U.S., transnational migration and immigration, U.S. social, cultural, urban, and labor history, food studies, the American West, and race and ethnicity in the Americas. He is the author of several book chapters and articles related to these topics and the monograph Steel Barrio: The Great Mexican Migration to South Chicago, 1915-1940 (NYU Press 2013).

Currently, he is working on two other books: Made in Chicago: Mexican Food, Tourism, and Cultural Identity and The Latino South: A History of Migration and Race in Pursuit of the American Dream.

About the Latin American and Latino Studies Program: Latin American and Latino Studies is an interdisciplinary area and ethnic studies undergraduate program in the J. William Fulbright College of Arts and Sciences at the University of Arkansas. It provides in-depth exposure to the key geographic regions, historical trajectories, social modes, languages, and political, economic, and cultural systems of Latin America and the Latino United States. The program sponsors a study abroad program, a high-profile lecture series, and cultural events throughout the year. Its curriculum draws from history, political science, anthropology, art history, sociology, English, economics, music, and language, literature and culture. Students may combine the LALS co-major (21 credit hours) or minor (15 credit hours) with a major in another field, enhancing their preparedness for employment with government or service agencies, corporations and enterprises dealing with Latin America and the Hispanic U.S., for teaching or international careers, or in preparation for other advanced degrees. More information about the LALS program may be found online, or follow us on Facebook.