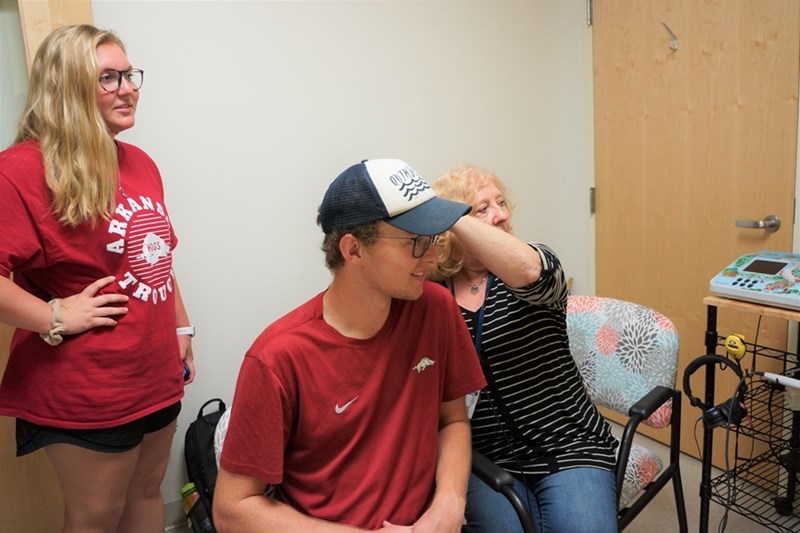 Alister Brown, who plays baritone in the Razorback Marching Band, gets fitted with custom ear plugs

Razorback Marching Band students at the University of Arkansas will be taking to the football field this academic year with a new piece of equipment: custom-made ear protection.

For her Honors College research project, sophomore Emily Myers decided to survey fellow band members to determine whether they wear ear plugs in practices and at games. Among the 67 members who responded to the survey, many reported not wearing ear protection provided by the band program.

Myers, a sophomore major in communication sciences and disorders in the College of Education and Health Professions, hopes to change that.

She sought out and received an Honors College Research Grant to see if custom-made musician earmolds might make a difference in band members' willingness to use ear protection. Myers' mentor, Margie Gilbertson, a speech and hearing clinical instructor at the U of A, is using stipend money to purchase materials.

The marching band has more than 330 student members representing every college within the university. Musicians closer in position to the "louder" instruments such as percussion, brass, or any amplification systems have an increased risk for noise-induced hearing loss.

Myers said the issue with over-the-counter earplugs is that they may not fit comfortably in a musician's ear, causing the individual not to wear them during rehearsals or performances. And the bigger issue for band members is that ear plugs may distort sounds, which could cause the musicians to have difficulty hearing across the ensemble, she said.

So discomfort, changes in sound quality, and lack of ability to communicate musically are all an issue for band members wearing ear protection, Myers notes. Improved comfort and sound fidelity will hopefully result in increased wearing time using the custom earmolds, she said.

The custom ear plugs will be outfitted with filters to help reduce noise by 20 decibels, while still allowing the musician to hear necessary sounds. These would typically cost around $200.

Benjamin Lorenzo, director of athletic bands at the U of A, said requiring ear protection can be difficult to enforce, but it's certainly something to be taken seriously. That said, he's hoping the custom ear protection will encourage more students to take care of their hearing.

"There is a lot more awareness about the health and safety of students in band programs when it comes to sound nowadays," he said. "I am glad we have students like Emily and the College of Education and Health Professions to support such a project."

U of A junior Alister Brown, who has played the baritone in the marching band since he was a freshman, is taking part in the study. He was at the Epley Center for Health Professions' Speech and Hearing Clinic recently to be fitted for his custom ear protection.

Students are allowed to choose their ear plug color and Brown chose a bright blue.

Alexa Peterson, a senior at the U of A, is also participating in the study.

"I'm super excited to be wearing custom ear protection," she said. "This is my fourth year in the band and as a trumpet player I'm constantly surrounded by extremely loud instruments both on the field and in the stands at games."

"I've tried wearing the provided ear plugs for years and they've never fit in my ears so I've just been going without for four years, so to finally have ear protection that will both fit and allow me to hear myself while playing is a game changer."

As part of the project, band members who receive custom ear plugs also agreed to have hearing tests before and after marching season.

Gilbertson said these hearing tests will yield information about hearing sensitivity. Administration of Distortion Product Otoacoustic Emissions Screening will offer information about neurophysiology of the cochlea or inner ear.

Myers and Gilbertson will analyze data from all the screenings after marching season, December through May. The results will be written, presented, and submitted for publication through the American Speech-Language Hearing Association.