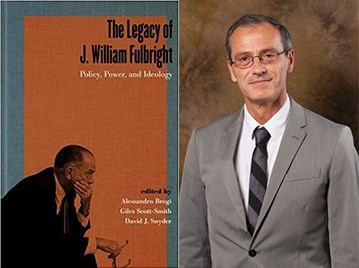 Professor Alessandro Brogi, the book's lead co-editor, along with the book's authors, including Distinguished Professor Randall Woods, bring a fresh international perspective to their evaluation of Fulbright's signature accomplishment: the impactful cultural exchange programs that bear his name.

Published by the University Press of Kentucky, The Legacy of J. William Fulbright: Policy, Power, and Ideology is the product of a conference held at the University of Arkansas on Senator Fulbright's legacy in Fall 2015, sponsored primarily by the Diane D. Blair Center of Southern Politics & Society, with additional support from the Department of History, the King Fahd Center for Middle East Studies, the African and African American Studies Program, and the J. William Fulbright College of Arts & Sciences.

The collection of essays details the political life of one of the most prominent and gifted American statesmen of the twentieth century. From his early training in international law to his five terms in the U.S. Senate, J. William Fulbright (1905-1995) had a profound influence on U.S. foreign policy, and his vision for mutual understanding shaped the extraordinary exchange program bearing his name.

As a senator for Arkansas for 30 years and the longest serving chair of the Senate Foreign Relations Committee, Fulbright was one of the most influential figures of United States politics. His criticism of U.S. involvement in Vietnam exemplified his belief in the effective management of international norms by international organizations ― including the United Nations, which was the subject of his first bill in Congress. Yet alongside his commitments to liberal internationalism and multilateral governance, Fulbright was a southern politician who embraced the interests of the region's conservative white population. This juxtaposition of biased and broad-minded objectives shows a divide at the center of Fulbright's vision, which still has consequences for America's global policies today.

Brogi is a professor of history in the Fulbright College of Arts and Sciences at the University of Arkansas. He is also the author of Confronting America: The Cold War Between the United States and Communists in France and Italy (North Carolina, 2011, Charles Smith Award of the Southern Historical Association), A Question of Self-Esteem: The United States and the Cold War Choices—France and Italy, 1944-1958 (Praeger, 2002), and Italy and American Hegemony in the Mediterranean (La Nuova Italia, 1996).