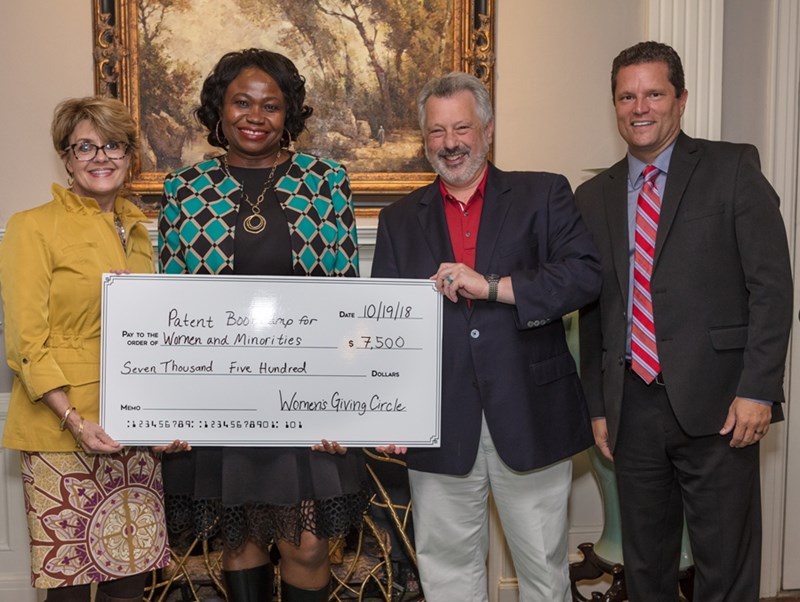 Professor Uché Ewelukwa Ofodile being awarded a Women's Giving Circle grant in 2018 for "Patent Bootcamp for Women and Minorities in STEM."

FAYETTEVILLE, Ark. – On Oct. 19, 2018, the University of Arkansas Women's Giving Circle celebrated its "Sweet 16" funding year by awarding $100,000 at its annual fall voting event. A Patent Bootcamp for Women and Minorities in STEM, proposed by Uché Ewelukwa Ofodile, the E.J. Ball Professor of Law, was among the 11 university programs funded.

On Friday, Sept. 13, the University of Arkansas School of Law, with support from the Office of Economic Development, will host the event, which is the first of its kind on campus. While the focus is on women and minorities in STEM, the one-day workshop is open to all innovators, inventors and entrepreneurs. It will be held from 8:30 a.m.-5:15 p.m. in the E.J. Ball Courtroom at the University of Arkansas School of Law. The workshop is free, and attendees are asked to pre-register.

Ewelukwa Ofodile's former students and mentees are excited about the award and the bootcamp.

"I am thrilled that professor Ewelukwa Ofodile has been awarded the Women's Giving Circle grant," said Shontavia (Jackson) Johnson, an associate vice president at Clemson University and the former director of the Drake Law School Intellectual Property Law Center. "Professor Ewelukwa Ofodile, who taught all of my intellectual property law courses, is the primary reason I decided to pursue a career in the field. From the day I began my career as an intellectual property associate at a law firm, through my time as a law professor and director of an intellectual property law center, into my current role as associate vice president for academic partnerships and innovation at an R1 research university, she has remained a constant and invaluable source of support and legal knowledge for me. I am proud to call her a colleague and friend."

"I attended professor Uché's LL.M. class for IP Issues in Food and Agriculture and was impressed by her comprehensive knowledge of patent law in the United States and abroad," said Kathi Cover, an intellectual property attorney with Sidley Austin LLP in Washington, D.C. "Even though I have been a practicing IP attorney for more than 20 years, I learned new and interesting things with every class. Professor Uché is also deeply committed to promoting STEM and her vision for a patent bootcamp will bring invaluable knowledge to women and minority-run businesses that will be critical to their success."

Patent Bootcamp for Women and Minorities in STEM will introduce attendees to the different types of intellectual property rights (copyrights, trademarks, patents and trade secrets) and will offer training on the basics of the U.S. patent law and the patent application process.

Experts from around the country will shed light on the acute "innovation gap" and patenting gap in Arkansas, equip women and minorities in STEM with basic knowledge of U.S. patent law, guide participants through the patent application process, encourage participants to proactively protect their rights and empower participants with tools that they need to guard their innovation against theft and exploitation.

She has authored numerous book chapters, articles and essays. Her articles on different aspects of intellectual property have appeared in The Arkansas Lawyer, The International Lawyer, the University of Miami Law Review, the JURIST and the International Law News, a flagship publication of the American Bar Association Section of International Law.

About the Women's Giving Circle: The Women's Giving Circle was created in 2002 by the founding members of the Women and Philanthropy Committee and Campaign for the Twenty-First Century Steering Committee. The purpose of the group is to create a substantial pool of new money from women in support of the University of Arkansas while, at the same time, encouraging women as philanthropic leaders. Members are alumnae and friends who recognize that women as donors have the capability of making a tremendous impact on the university and its students, faculty and staff.