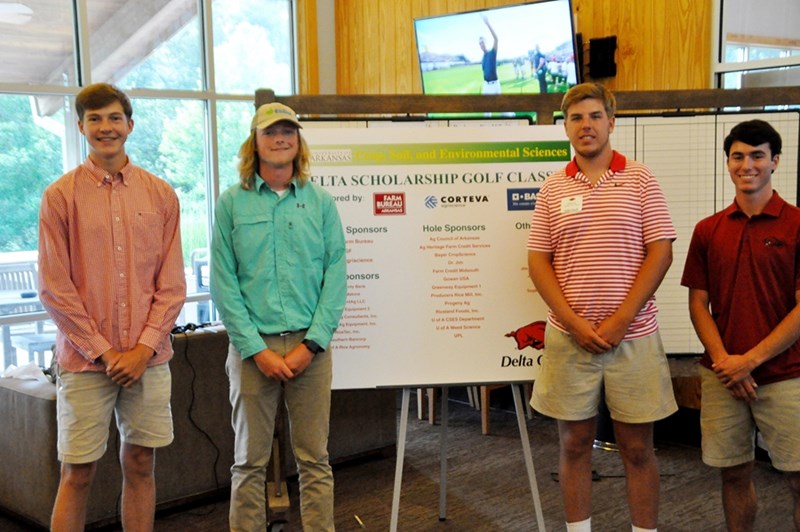 Since 2000, the tournament has resulted in 192 scholarships worth $439,352.35 for Dale Bumpers College of Agricultural, Food and Life Sciences students majoring in either crop science or environmental, soil and water sciences.

The tournament was July 19 at The Ridges at Village Creek at Village Creek State Park in Wynne, and all 20 events have been coordinated by friends, alumni and staff from the Department of Crop, Soil and Environmental Sciences.

"The 20th Delta Scholarship Golf Classic was a huge success thanks to all the committee volunteers and (CSES recruiting coordinator) Mrs. Holly Yeatman," said Glenn Kernodle, tournament co-director and North Delta sales rep for Gowan USA in Cabot. "The fundraiser was formed to help agricultural students with scholarships. The support for the tournament from the agriculture industry contributes to the future of Arkansas agriculture by helping agriculture students financially."

"As always the tournament was a big success," said Robert Bacon, CSES department head. "I am amazed that the tournament reached its 20th year. Several of the alumni and friends group that were there for year one were helping again this year. It is really wonderful to have that kind of support."

"BASF is proud to be a corporate sponsor of the 'Delta Classic,' which has been a vital component for the Delta area of Arkansas," said Brad Koen, Delta Area manager for BASF. "The money raised from this tournament has been a life-line for students from Southeast Arkansas, assuring that the ag industry remains strong. BASF has always been honored to sponsor such an event that benefits our industry and honors such a great man as (former department head) Dr. James Barrentine."

"It's an honor for CORTEVA agriscience to be a part of this legacy event in which Dow and DUPONT have both participated in the past," said Darrin Malone, Midsouth district sales leader for CORTEVA and co-director of the tournament. "It's great to honor students from east Arkansas in crop science and be a part of their career. The best part of the tournament is that we get to see these students come back and be a part of Arkansas agriculture. We look forward to participating in the future and watching this legacy tournament continue to grow."