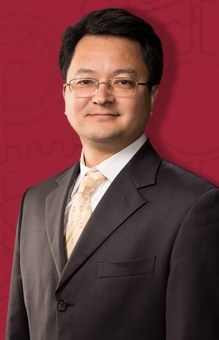 The Institute of Industrial and Systems Engineers has awarded Haitao Liao the title of Fellow. Liao is a professor of industrial engineering and the John and Mary Lib White Endowed Systems Integration Chair. The award was presented at the IISE international conference in Orlando May 18-21.

The title of Fellow recognizes outstanding leaders of the industrial and systems engineering profession who have made significant, nationally-recognized contributions to the profession. A fellow is the highest classification of IISE membership.

To be eligible, a nominee must be at least 40 years old, and a senior member of IISE for a minimum of 10 consecutive years or five continuous years, following at least five continuous years in an international industrial engineering organization that collaborates with IISE and represents IE in its region. No more than 20 fellows are named each year and candidates must demonstrate outstanding accomplishments in both their professional career and service.

Ed Pohl, head of the Department of Industrial Engineering, praised the achievement.

"Haitao continues to fall at the top of the department with regard to research and I feel fortunate to have him as a member of our faculty," he said. "This accolade is well-deserved as he has made positive impacts in areas such as probabilistic risk assessment, reliability, degradation modeling, prognostics and more. He is recognized as a scholar internationally, and his willingness to take on leadership and mentorship roles within the department is extremely helpful. I am happy to see his efforts rewarded with the title of Fellow within IISE."