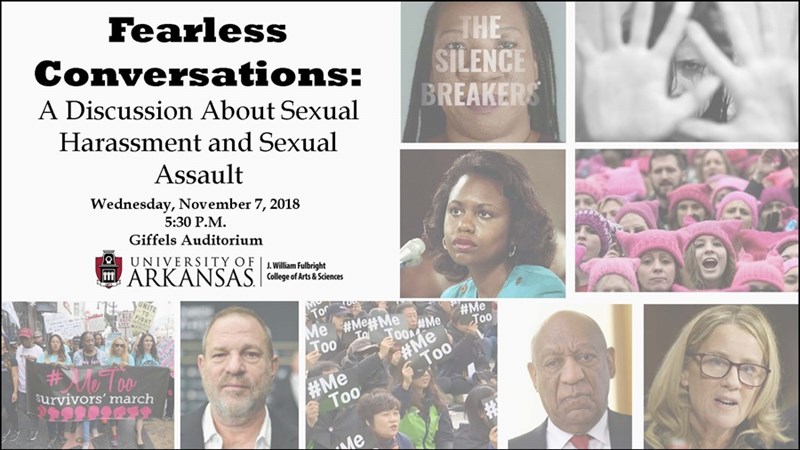 The J. William Fulbright College of Arts and Sciences at the University of Arkansas invites community members, students, faculty and staff to participate in its series, "Fearless Conversations," which promotes dialogue about the most pressing and salient issues of our time in an effort to achieve meaningful public discourse in an increasingly divisive culture.

The next event in the series will be "Fearless Conversations: A Discussion About Sexual Harassment and Sexual Assault," which will take place at 5:30 p.m. Wednesday, Nov. 7, in Giffels Auditorium, 201 Old Main. This event is free and open to the public.

School of Social Work's Valandra, director of the African and African American Studies Program, and employment attorney and certified executive leadership coach Ronetta J. Francis will lead and facilitate this open dialogue between all who attend.

"These are such far-reaching and necessary topics to discuss," said Elecia C. Smith, Fulbright College's assistant dean of human resources, diversity and faculty services, who helped organize the series. "The ongoing goal of this series is to facilitate civil discourse around complex and often controversial topics in a safe and supportive environment."

Smith said that since there are so many aspects and nuances to the topics of sexual harassment and sexual assault, the direction the dialogue takes will be largely driven by the participation of the audience, along with help from Valandra and Francis.

"Previous Fearless Conversations have centered on memorials, monuments and symbolic protests, as well as on immigration and migration — and they've been fantastic and extremely valuable," Smith said. "We are excited to continue the series, and this will be another wonderful opportunity to learn and talk about some incredibly timely and important societal topics."

Valandra is an assistant professor in the School of Social Work and director of the African and African American Studies Program. Her research and numerous published works center on the voices of African American women and families marginalized and traumatized through systems of poverty, prostitution, domestic violence and sexual assault. It also emphasizes the strengths and protective factors developed within intergenerational parenting and family networks, which mitigate risks and promote resilience and recovery. Her research includes understanding the needs of African American families experiencing domestic violence in Northwest Arkansas, and child welfare and literacy in the Little Rock School District.

Ronetta J. Francis is the founder of the Francis Dynamics Consulting Group, an employment attorney and certified executive leadership coach. She founded Francis Dynamics Consulting Group to empower personal development and accelerate organizational performance by equipping individuals and entities with personal growth, executive leadership and risk management strategies. She is a seasoned employment attorney, with over 23 years combined practicing as a senior trial attorney with the U.S. Equal Employment Opportunity Commission, and as in-house counsel for Walmart Stores, Inc. She also led employment compliance and ethics functions for Walmart, as the Vice President of U.S. Ethics and Employment Compliance.