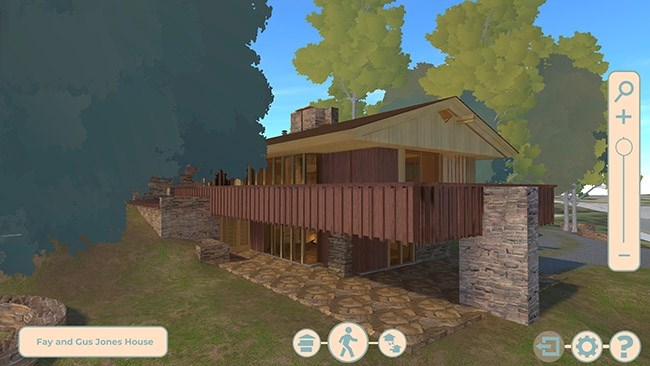 This screenshot shows a view of the Fay and Gus Jones House as it appears in the new interactive kiosk's program.

FAYETTEVILLE, Ark. – "A House of the Ozarks" is an interdisciplinary project led by Greg Herman and David Fredrick, professors at the University of Arkansas, which is designed to bring the residential designs of Fay Jones to a wide public audience.

Jones, an Arkansas native, U of A alumnus and long-time Fayetteville resident, was a world-renowned architect and recipient of the American Institute of Architects Gold Medal.

One component of this project is the development of a prototype touch-based kiosk, which will be unveiled for a trial run on Saturday, Oct. 13, at the Fayetteville Farmers' Market on the downtown square in Fayetteville. The kiosk will be located on the southwest corner of the square, adjacent to the Fayetteville Visitors Bureau.

All are invited to experience this interactive and innovative approach to making the work of Fay Jones available to the public.

This kiosk will allow users to explore Jones' architecture in three dimensions, discover related historical artifacts and critically consider his design principles. It will launch with a virtual recreation of Jones' family home, built in Fayetteville in the 1950s.

Herman, Fredrick and their team also are working on a prototype website, still in development, that is designed to more broadly share Fay Jones' residential designs. The kiosk is a complement to the website. Eventually, the kiosk will be placed at high-traffic public locations across Northwest Arkansas. The Oct. 13 event also serves as a soft public launch for the overall project.

Jones is renowned for an architectural approach that combined simple elements — stone, wood and glass — into an expression of great richness, while retaining the organic principles and simplicity of expression derived from his mentor and early employer Frank Lloyd Wright.

Jones' Thorncrown Chapel in Eureka Springs, completed in 1980, has been listed by the AIA among the most significant buildings of the 20th century. Several of his designs for houses and chapels have been honored by the architecture profession for the strength of their design and their appeal to a broad audience.

Jones' own house in Fayetteville, occupied in 1956, was the first project completed by Jones at the start of his independent professional career. Referred to by Jones' wife, Gus, as "Fay's Experiment," the house includes many of the signature components and details that would be refined in the architect's more mature work, and thus serves as a critically important sampler of his design intentions.

Through interactive timelines, maps and 3D models, the kiosk and website will unfold how Jones developed his alternative blueprint for an American house, a house of the Ozarks grounded in its regional setting, and connected fundamentally with earth and sky.

In direct contrast with most suburban plans, the houses of Fay Jones are intricately designed to connect their inhabitants with each other and the natural world.

This interdisciplinary project is supported by an award from the Chancellor's Discovery, Creativity, Innovation and Collaboration Fund for 2017-18.