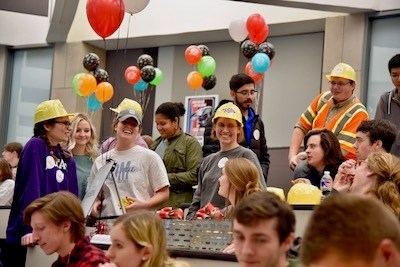 Known as Decision Day, the event takes place each spring after first-year students have completed their general engineering coursework and are prepared to select from one of the eight courses of study offered by the College of Engineering. The tradition began 10 years ago as a way to celebrate the milestone in students' careers.

Representatives from each department are on hand to cheer as each student steps to the microphone and announces their field of study, and the day is capped with food and networking with new peers.

Richard Cassady, director of the Freshman Engineering Program, said Decision Day is fun, but it's also a critical part of helping students choose a successful path.

"Decision Day is important because helping students make an informed choice of major is one of the top priorities of the Freshman Engineering Program," he said.

But, Cassady said, his favorite part is watching students making progress toward their goals.

"That's the best part of Decision Day — seeing the students celebrate their decision and interact with their new advisers and new peer group for the first time," he said.