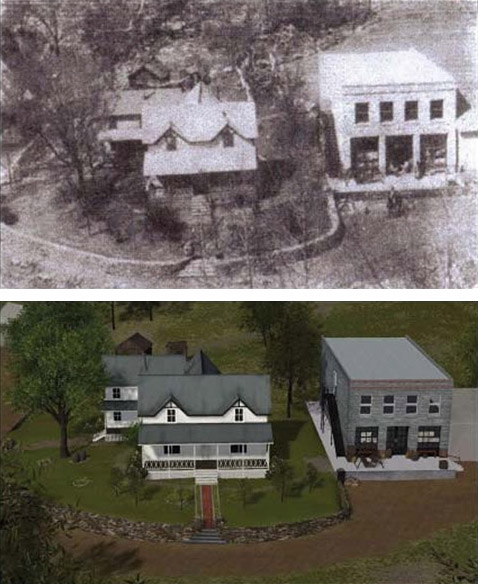 A comparison of the Hicks property from the same vantage point atop a bluff: photograph (circa 1918) at top; digital reconstruction of early 1920s at bottom.

FAYETTEVILLE, Ark. – A project by faculty, staff and students of the Fay Jones School of Architecture and Design and the Center for Advanced Spatial Technologies at the University of Arkansas recently received a 2017 Honor Award for Communications from the Arkansas Chapter of the American Society of Landscape Architects.

"If Walls Could Talk: The Story of the Hicks Property, at Rush Historic District on the Buffalo National River, Arkansas" uses Esri story mapping and a Historic American Landscape Survey to tell the story of an abandoned Ozark mining town and a prominent family who lived there in the early 1900s.

The award was presented at the 2017 ASLA awards luncheon, held Oct. 6 at Garvan Woodland Gardens in Hot Springs.

Kimball Erdman, associate professor of landscape architecture, led students in creating these multimedia resources, which are digitally housed at the U of A Center for Advanced Spatial Technologies. Angie Payne and Brian Culpepper of CAST assisted.

"This project combined public education, service and advocacy with undergraduate student research, education and technology — an ideal teaching situation that combined the best of all worlds," Erdman said.

Students completed a Historic American Landscapes Survey to lay the groundwork for the project. They documented the existing site with photographs, measured drawings and a detailed report, all of which will be available to the public at the Library of Congress.

They then created a virtual tour to lead residents through the growth, boom years and subsequent decline of the Buffalo River mining town. The story map features historic and contemporary photographs, newspaper clippings, maps, oral histories and historic records to illustrate the detailed narrative. The highlight is a digital reconstruction that affords visitors a glimpse of what the Hicks property might have looked like in its heyday.

Funded through a grant from the National Park Service, the goal was to provide public education about a landscape frequently visited but not well understood, Erdman said. The Rush Historic District is on a popular access road for Buffalo National River floaters in north central Arkansas. People sometimes stop to prowl through the stone ruins — a retaining wall, garden features and portions of the Hicks general store — without understanding the rich history of the site.

Rush was a boomtown built to support the mining of zinc. The Hicks family arrived in 1903, building a hotel, starting a livery and opening a general store to meet the needs of miners and their families. The town reached its heyday with a population of 3,000 during World War I, when demand for U.S. zinc was at its height. The population decreased in subsequent years. The last Hicks family members moved away in the 1950s.

Other goals of the project were to encourage site preservation through documentation and heightened awareness and to educate students engaged in the project in ongoing preservation efforts.

In addition, a design project by the University of Arkansas Community Design Center received an Honor Award for Analysis and Planning at the ASLA luncheon. "Slow Street: A New Town Center for Mayflower, Arkansas" envisions a walkable mixed-use neighborhood center for the central Arkansas town of Mayflower, struck by an EF4 tornado in April 2014.

The U of A Community Design Center is an outreach program of the Fay Jones School.