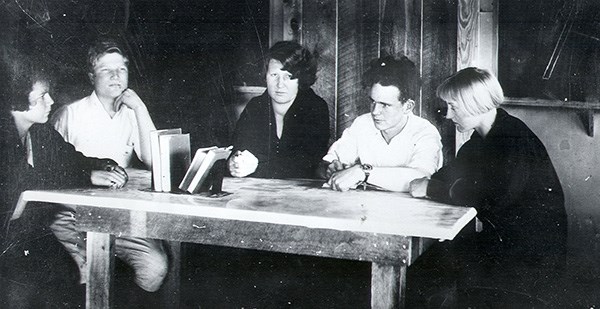 A newly searchable digital collection is now available for viewing on the University of Arkansas Libraries' Digital Collections website. The initial digitization of the Commonwealth College Fortnightly newspaper was made possible by professor Stephen A. Smith of the J. William Fulbright College of Arts and Sciences' Department of Communication.

"By providing researchers with the ability to do keyword searching, this digital project greatly enhances the discoverability of this rich collection," said Lori Birrell, head of Special Collections.

Commonwealth College in Mena published hundreds of issues of its newspaper, the Fortnightly, from 1926 to 1938. This digital collection provides access to more than 200 issues, allowing researchers to utilize the most complete record of activity at Arkansas's historic radical labor school.

The original mission of Commonwealth College was to produce educated leaders for the rapidly growing labor movement. Throughout the 1930s, the college became more strongly affiliated with the Socialist Party. As community members became more politically radical, some became Communist Party members and operatives. In 1934, the school aligned itself with the Southern Tenant Farmers Union, a group comprising tens of thousands of sharecroppers and tenant farmers. However, political factionalizing and rifts related to racial issues and the Communist Party caused the union to formally sever ties in 1938. Two years later, Commonwealth closed its doors, its property sold at auction to satisfy its debts.

The Fortnightly offers a close look at the community life and activities of Commonwealth. Issues include mentions of special visitors, reports on national and international labor and political developments, and updates on the teachers and groups associated with the school.

The Libraries gratefully acknowledge assistance from the Walter P. Reuther Library at Wayne State University and the Annenberg Rare Book and Manuscript Library at the University of Pennsylvania in providing copies of issues not in our collection.

The physical Fortnightly newspapers are available to researchers in the Special Collections department, located in Mullins Library.