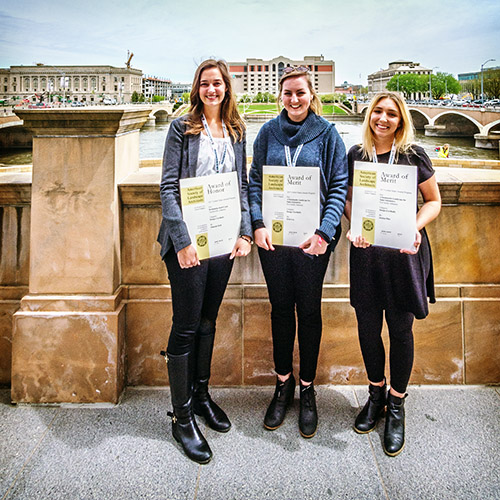 Hannah Moll, Erin Cox and Jordan Pitts show off the awards they received from the Central States Region of the American Society of Landscape Architects, during the conference in Des Moines, Iowa, in April.

FAYETTEVILLE, Ark. – Design work created by students Hannah Moll, Erin Cox and Jordan Pitts in the Fay Jones School of Architecture and Design at the University of Arkansas recently was recognized by the Central States Region of the American Society of Landscape Architects.

Moll won an Honor Award for her design "Reclaiming Scull Creek," and Cox and Pitts each won a Merit Award for their designs for St. Scholastica Monastery, all in the Student: Design (Unbuilt) category.

The students traveled to Des Moines, Iowa, in April to receive their awards at the 12th annual ASLA Central States Regional Conference.

Moll, who graduated Saturday, created this project focused on Scull Creek in spring 2016 during her fourth-year studio with Noah Billig, assistant professor of landscape architecture. Scull Creek, which is used by about 2,000 people daily, flows closely along the Fayetteville trail system through prominent areas that connect to businesses, parks, residential areas and the university.

However, most of the trail system does not provide access to Scull Creek. Several segments of the stream buffers are eroding, and there are few points for people to access the creek to learn about stream ecology or explore. Moll's design aims to improve these aspects.

Her "Reclaiming Scull Creek" project analyzed the topographical features and watershed surrounding Fayetteville to understand the area's hydrology. In it, she offered simple design solutions that would promote stream education, accessibility and ecology.

Moll chose three locations along the creek for design interventions, largely based on their proximity to high-traffic areas along the trail; the need for controlling erosion and invasive species; and the potential for engaging ecological spaces.

For instance, at the section of the creek at Gordon Long Park, Moll proposed adding a series of limestone retaining walls and re-grading the creek banks. These actions would slow the water at a high erosion point, while allowing for native species to become established and providing an access point for visitors.

Another intervention would be along the trail near Sycamore Apartments. She proposed introducing recycled concrete slabs and placing them in a mosaic pattern to connect the creek, trail and nearby land. A stand of sycamore trees would create a canopy for those using the trail and nearby residents, while a concrete staircase would provide access to the stream.

In her project "A Sustainable Landscape for St. Scholastica Monastery," Pitts looked at the long-standing monastery in Fort Smith with a few specifics in mind.

St. Scholastica, located on a 65-acre estate, is home to an order of Benedictine nuns who are conscious about the environment. They are downsizing from the neo-Gothic five-story monastery that has housed them for more then 90 years, and planning a smaller, one-story facility.

Pitts wanted to provide a beautiful landscape for the sisters to allow for harvesting of their gardens, walking, contemplation and prayer. In her design, Pitts also aimed to design a landscape for that new building that would responsibly handle stormwater, paying attention to environmental and ecological concerns.

One design feature was a bio-retention pond, a shallow depression combining vegetation with designed soils to filter and absorb water. This combination of soil and plantings would enhance the infiltration, storage and removal of pollutants from stormwater collecting over extended periods of time.

Landscape architecture students, including Pitts and Cox, worked on this project during their second-year studio in spring 2016 under the guidance of Carl Smith, an associate professor of landscape architecture. These students collaborated with biological engineering students from the College of Engineering to create opportunities for education, habitat, aesthetic appeal and recreation for the sisters as well as the greater Fort Smith community.