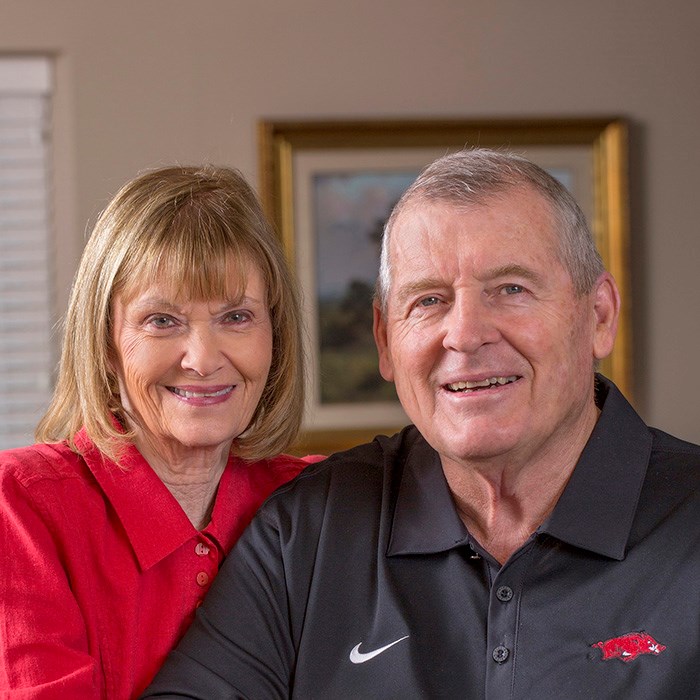 The hub will be located on the historic Fayetteville Square and will support collaborative entrepreneurship and innovation efforts across campus while serving as a starting point for students and their companies to launch their ideas.

"We are very grateful to the Brewer family for investing in entrepreneurship efforts at the university," said Jim Rankin, vice provost for research and economic development. "The Brewer Entrepreneurship Hub will provide our students and faculty with an excellent venue for the creation of innovative new technologies and business ventures, which are key to the long-term development of our state and nation."

A Springdale native, Jerry Brewer was the first in his family to earn a college degree and his son followed, graduating from the U of A as well. Brewer earned a Bachelor of Science and master's degree in education from the university before coaching at Woodland Junior High and Fayetteville High School for several years. Brewer and his wife then moved to Baytown, Texas, where he coached for several years.

Following this experience, Brewer became involved in banking and real estate entrepreneurship. In 1988, he and his wife and son started Brewer Personnel, which later became StaffMark.

Clete Brewer had graduated with a business degree from the Sam M. Walton College of Business just one year prior and understood the significance of his father giving him the opportunity to begin this venture as a business partner.

"My dad knew how to coach people and was a football-coach-turned-entrepreneur who wanted to provide a better life for his family," Brewer said. "He is my entrepreneurial hero, and Sam Walton was his. He always looked at things from an entrepreneurship standpoint instead of just the status quo. To him, there was always a better way, and that is what we strived to do in business. He was like a father to most people in our organization, and his motto was 'Always focus on being the best.' He knew growth would follow."

This respect for his father's career and persona is what inspired Brewer and his wife to donate to the entrepreneurship hub themselves.

"Tammy and I contributed to this in honor of my dad," said Brewer. "We're honored to do this. This space will give people access to resources, so they can realize their dream while they work on their education. It will give them a foundation of knowledge on which to build their dreams."

Carol Reeves, associate vice provost for entrepreneurship, said, "Clete Brewer has been a tremendous supporter of our entrepreneurship efforts for a decade. The Brewer Family Entrepreneurship Hub will allow us to reach more students and connect more meaningfully with the Northwest Arkansas community in an exciting new facility. Being located near other start-up spaces in Fayetteville will also encourage collaboration among students, faculty and the community."

Clete Brewer is now managing partner of NewRoad Capital Partners in Rogers. He is actively involved in the Walton College's entrepreneurship efforts and says he's excited about Reeves' work.

For Jerry Brewer, watching his son become an entrepreneur and help others through NewRoad Capital Partners is like seeing everything come full circle.

"I hope this Entrepreneurship Hub will remove boundaries for anyone on campus - no matter their background, GPA or major - so they can achieve success in entrepreneurship," he said.

Jerry and Kay Brewer are life members of the Arkansas Alumni Association, members of the Chancellor's Society and are recognized as ThoroughReds for their years of consecutive giving to the university.

About Campaign Arkansas: Campaign Arkansas is the ongoing capital campaign for the University of Arkansas to raise private gift support for the university's academic mission and other key priorities. The campaign's goal is to raise $1 billion to support academic and need-based scholarships, technology enhancements, new and renovated facilities, undergraduate, graduate and faculty research, study abroad opportunities and other innovative programs. The University of Arkansas provides an internationally competitive education for undergraduate and graduate students in a wide spectrum of disciplines as it works to fulfill its public land-grant mission to serve Arkansas and beyond as a partner, resource and catalyst.