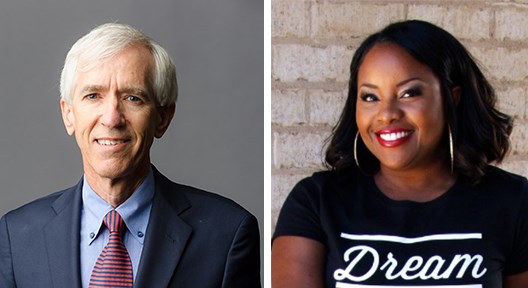 FAYETTEVILLE, Ark. – Bert Greenwalt, a professor at Arkansas State University, and Ulanda Terry, owner of the events and design company All Things POSH, have been named alumni award winners for 2016-17 by the Department of Agricultural Economics and Agribusiness in the University of Arkansas' Dale Bumpers College of Agricultural, Food and Life Sciences.

They will be honored on Friday at 3:30 p.m. in Hembree Auditorium in the Agriculture, Food and Life Sciences Building. In addition, David Schweikhardt, a professor at Michigan State University, is making a guest presentation. The event, which includes a reception on the Maudine Sanders Student Plaza and Garden and Hawkins Family Terrace, is free and open to the public.

Greenwalt is a professor of agricultural economics at ASU and farms with his family in Hazen. He grew up working with parents Ralph and Idena, and brother Eric on their Century Farm. His family was named Arkansas East-Central Farm Family of the Year in 1984 and the farm received the Arkansas Outstanding No-Till Farm Award in 1985. He currently manages the farm's government programs, marketing and finance.

Currently the director of the Arkansas Agricultural Council, Greenwalt co-founded the A-State Agribusiness Conference in 1995, which focuses on the farm economy and agricultural policy. From 1999-2004, he served on the Federal Reserve Bank of St. Louis board of directors and later served eight years as a member of the St. Louis Fed Agribusiness Council.

Terry's All Things POSH focuses on providing upscale and memorable events, design services and products. Her location in Fayetteville includes two rooms to rent for parties, bridal/baby showers and intimate events. The space includes a shop with custom gifts, florals and her POSH Inspirational t-shirt line.

Terry worked 11 years at Tyson Foods in Recruiting, Employment Compliance, and Diversity and Leadership Development, and was responsible for the company's Business Resource Groups, Diversity Leadership Council and the ENHANCE Onboarding Program. Terry, who also worked in human resources at Walmart, has been named to the NWA Business Journal's 40 Under 40 in 2010, NWA Young Woman of the Year at the Northwest Arkansas Business Women's Conference in 2013 and the AAA Black Alumni Society's 2015 Young Alumna.

The Pine Bluff native earned her master's in agricultural economics from the U of A in 2003.

Schweikhardt teaches agricultural policy, trade policy and law in the Department of Agricultural, Food and Resource Economics at Michigan State. His presentation is "Politics By Other Means: The Fragmentation of Food Politics and Markets." Schweikhardt earned doctorate and law degrees from MSU. His research and extension work focuses on agricultural and trade policy, including the North American Free Trade Agreement, the World Trade Organization and all U.S. farm bills since 1990.