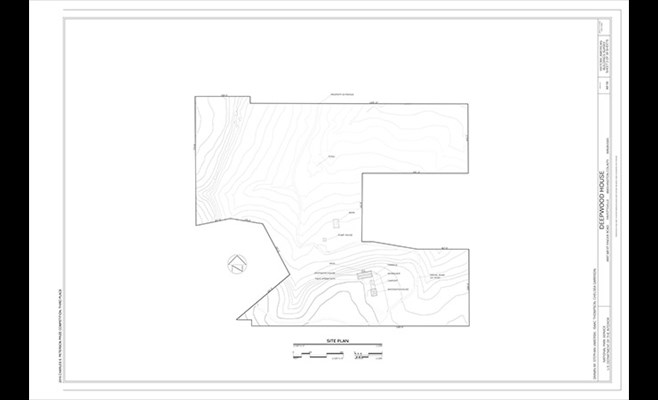 The site plan for Deepwood House, designed by Herb Fowler in 1960. 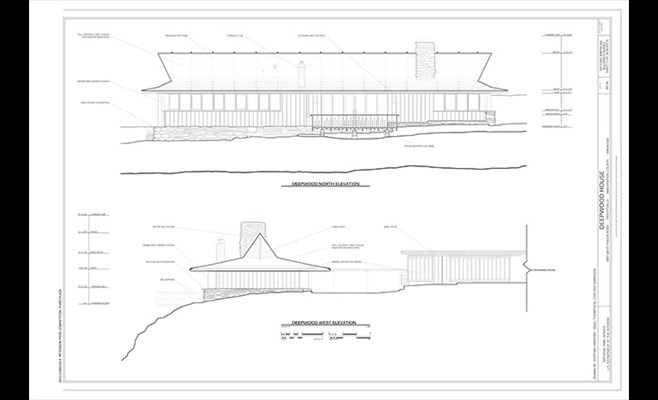 The north (top drawing) and west elevations of Deepwood House, which is sited at the edge of a bluff on Mount Kessler. 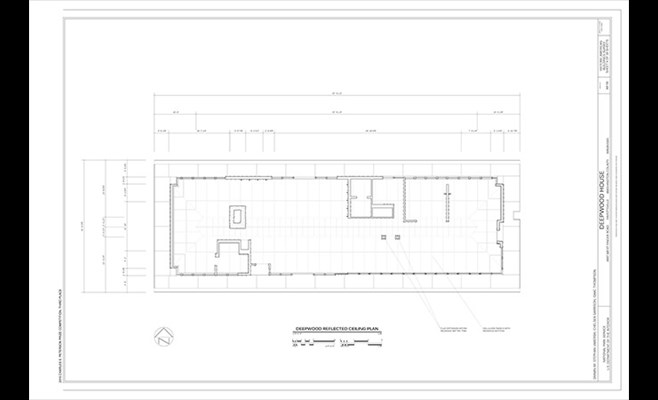 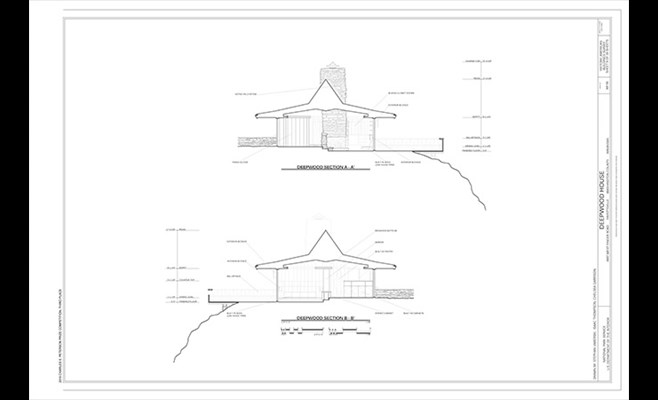 Sections from the east (top) and west sides. 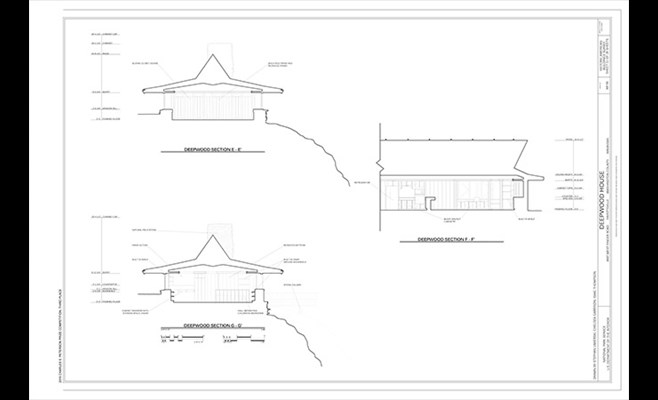 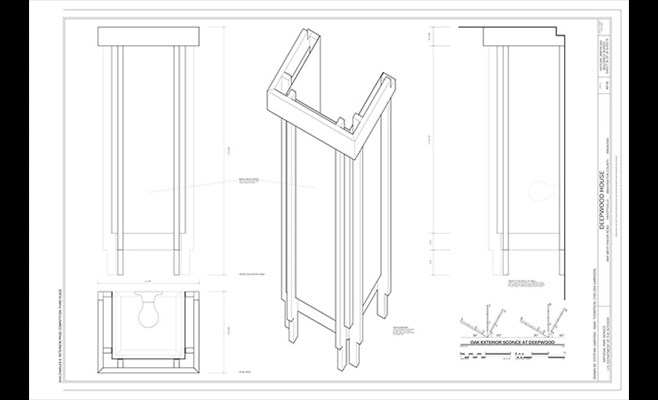 Diagrams of the oak exterior sconces at Deepwood House. 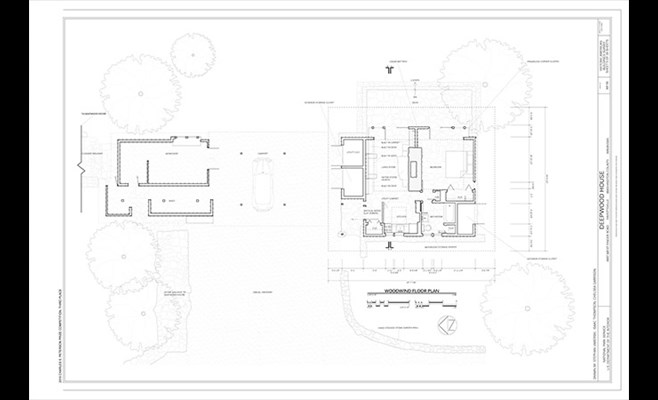 The floor plan of Woodwind, a guesthouse added to the site in 1964. 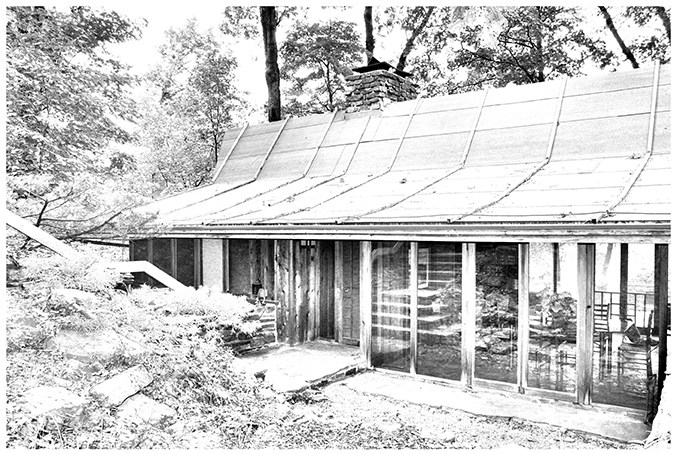 Deepwood House in Fayetteville was designed in 1960 by the late Herb Fowler, then an architecture professor in the Fay Jones School of Architecture and Design.

FAYETTEVILLE, Ark. – Architectural drawings by students of the Fay Jones School of Architecture and Design at the University of Arkansas have won a prestigious national prize for the second time in recent years.

The drawings of Deepwood House in Fayetteville, prepared according to the specifications of the Historic American Buildings Survey, won third place in the 2016 Charles E. Peterson Prize Competition. Greg Herman, associate professor of architecture, was the instructor who led the students in their work over the last year.

The Peterson Prize is presented by the Historic American Buildings Survey, a part of the National Park Service, and by the Athenaeum of Philadelphia and the American Institute of Architects. This prize annually recognizes the best set of measured drawings prepared to the survey’s standards and donated to the survey by students. The students’ drawings will be placed in the Library of Congress.

Beginning in the summer of 2015 and ending in June 2016, students took measurements of various aspects of Deepwood House and created the architectural drawings for the competition. The three students on the team were Chelsea Garrison, Isaac Thompson and Stephan Umierski, with contributions by Wendy Cargile and Jacob Boatman.

The survey documentation had exacting requirements, such as the sheet layout, size of paper and diagram line weights. In addition to the printed copies of their drawings and printed photographs, documentation of the design process was also required.

Deepwood House was designed in the early 1960s by Herb Fowler, then an architecture professor in the Fay Jones School. The house is nestled under a tree canopy on the north side of Mount Kessler in Fayetteville. Students measured the structure and recorded it in its original condition from Fowler’s design. The house has undergone few major renovations since its construction, and it is easy to see the vision Fowler had for the private home.

Long and low, composed of site-harvested wood and native stone, the house is a soft and restive environment comfortably situated on a bluff overlooking a secluded valley. Similar in some ways to the work of Fay Jones, the open floor plan of the three-bedroom home was designed to reflect Fowler’s life experiences, including his time in Norway as a Fulbright scholar, and there is a Scandinavian vernacular feel throughout the home.

Deepwood House is currently owned by Tom Butt, an alumnus of the Fay Jones School. Butt, who is the mayor of Richmond, California, rents the secluded property as an executive retreat.

The annual Peterson Prize competition honors the late Charles E. Peterson (1906-2004), who was a Fellow of the American Institute of Architects and founder of the Historic American Buildings Survey program. Now in its 34th year, this competition was created to heighten awareness about historic buildings in the United States and to amplify the survey collection of measured drawings at the Library of Congress. There are currently more than 6,300 sheets of drawings within the collection.

During the judging process, jury members considered many aspects, including the significance of the building; the complexity of the site and structure in relation to the team size; the quality of field records; the level of documentation and interpretation; and the overall quality of the architectural drawings.

The third place award money, a check for $2,000, will be used to fund future Historic American Buildings Survey projects in the school. The students are traveling to San Antonio, Texas, for the Peterson Prize award ceremony on Tuesday, Nov. 1.

This is the second time that Herman’s students have won the Charles E. Peterson Prize. In 2010, another group of architecture students guided by professor Herman was awarded first place in 2010 for their drawings of the Fay and Gus Jones House in Fayetteville. Previously, students in the Fay Jones School have been recognized three times in the Peterson Prize competition, all in the mid-1980s.

About the Fay Jones School of Architecture and Design: The Fay Jones School of Architecture and Design at the University of Arkansas houses professional design programs of architecture, landscape architecture and interior design together with liberal studies programs. All of these programs combine studio design education with innovative teaching in history, theory, technology and urban design. A broad range of course offerings equips graduates with the knowledge and critical agility required to meet the challenges of designing for a changing world. Their training prepares students with critical frameworks for design thinking that also equip them to assume leadership roles in the profession and in their communities. The school’s architecture program was ranked 26th in the nation, and the 12th best program among public, land-grant universities, in the 16th Annual Survey of America’s Best Architecture and Design Schools, a study conducted in 2015 by the Design Futures Council and published in DesignIntelligence. For more information visit fayjones.uark.edu.