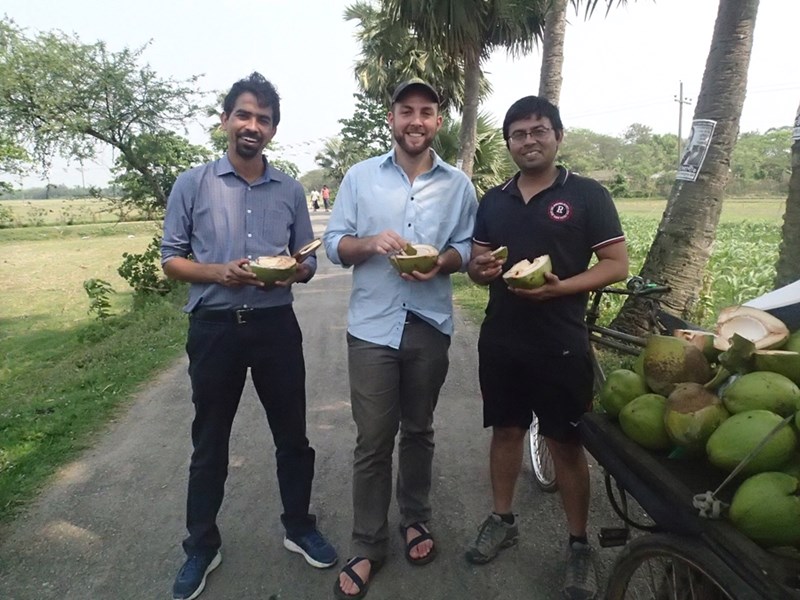 Coastal Bangladesh is sinking. To protect the region and its inhabitants, embankments were built around the most vulnerable delta islands in the 1960s, creating polders. Though the polders have provided protection to the region's eight million inhabitants, they have created difficulty for the area's farming families. Graduate student Aaron Shew is working to change that.

According to Shew, the low farm productivity stems from water management issues. The nature of the polders requires water be managed with sluices. In the dry season, the lack of fresh water in the rivers makes water sources too salty. In the rainy season, flooding wreaks havoc on crops.

"In the dry season, more than 90 percent of the farmland on the polders is fallow," said Shew, an environmental dynamics doctoral student. "In the rainy season, rice crops frequently become submerged in water and die before they can be harvested."

The Distinguished Doctoral Fellow believes these problems could be solved by finding crops better suited to the polders' unique environmental conditions.

"Not enough has been done to determine what the viability of certain crops actually is," he said.

Shew's plan to address the polders' agricultural woes is three-fold. First, he wants to complete a land survey of one of the polders. He would use the information gathered to develop a topographical model outlying which crops should be grown in each region of the polder during both the rainy and dry seasons.

Second, he plans to complete a risk aversion survey of the region's farmers. This would give him a better idea of farmers' willingness to plant certain crops, and help him learn what barriers exist that may prevent them from adopting new agricultural practices.

The final step of the process is to provide insight into which training and educational programs can bridge the knowledge gap and facilitate the adoption of improved agricultural practices and technologies.

"The idea is to be able to tell a farmer what percentage of certain crops to plant in which areas, in order to avoid risk and maximize return, and then help them begin to implement those changes" Shew said.

Shew, who is advised by Lanier Nalley, said his work in the Bangladeshi region has often raised more questions than answers, but said he finds enjoyment in the rewarding nature of the work he and his colleagues are producing.

"We're answering questions that aren't just being published in academic journals, where practical implications are often overlooked" Shew said. "We're using this research to answer questions that directly impact the livelihoods of people."

Shew's research is supported by a National Science Foundation Graduate Research Fellowship and by the Sustainable Intensification Innovation Lab, which is funded by Feed the Future.