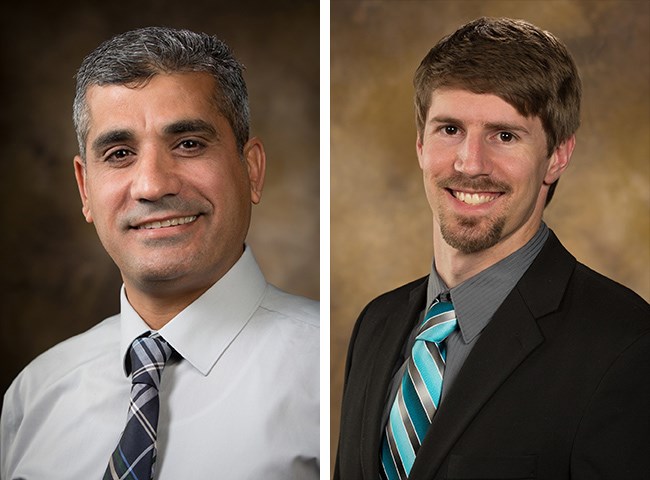 FAYETTEVILLE, Ark. – University of Arkansas researchers have discovered that a newly developed plasmonic fabrication capability and design can improve the performance of biosensors, solar cells and photodetectors.

The researchers published their findings in Photonics Research, a journal of the Optical Society of America.

Plasmons are waves of electrons in metallic structures that scatter light depending on the structure geometry as well as other variables. This light can be strengthened by controlling different parameters of the nanostructures, and can be focused to a nanoscale volume, which is usually difficult to do because of the optical diffraction limit.

The study shows that a novel dual-width design for plasmonic devices has a performance that is more than double compared to that of traditional plasmonic grating structures. The two structures of different widths have different individual resonances when isolated from one another, so bringing them within a few nanometers causes the two to couple to one another, creating a new “hybridized” plasmonic resonance.

The study’s co-authors are Ahmad Darweesh and Stephen Bauman, both doctoral students in the U of A’s microelectronics-photonics graduate program, and Joseph B. Herzog, assistant professor in the Department of Physics in the J. William Fulbright College of Arts and Sciences. The authors presented aspects of their study in August at the SPIE Optics and Photonics Conference in San Diego. SPIE is the international society for optics and photonics.

Bauman is a Doctoral Academy Fellow at the U of A. Darweesh is studying at the university on a scholarship from Iraqi Ministry of Higher Education and Scientific Research. Both are officers of the Arkansas Laserbacks SPIE student chapter.