A Salute to Faculty Inventors 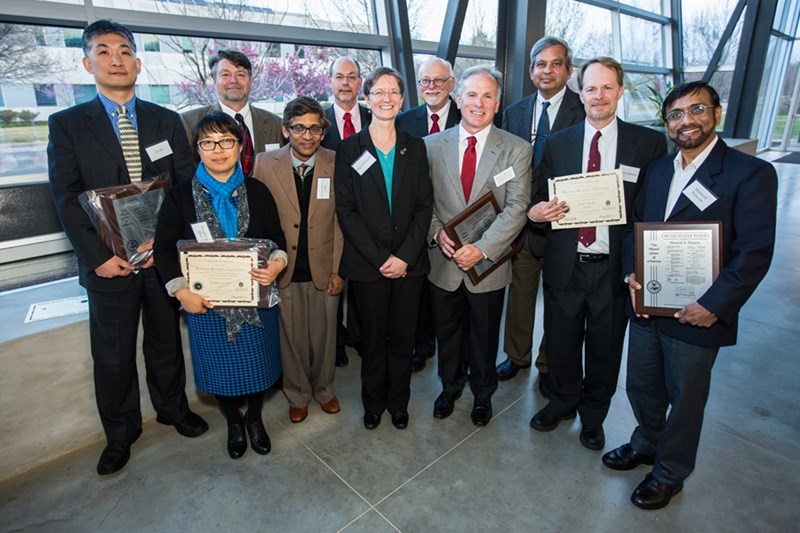 The event, held at the Innovation Center at the Arkansas Research and Technology Park, saluted the accomplishments of inventors who have been issued recent patents. They were initiated into the National Academy of Inventors, a nonprofit organization that accepted the University of Arkansas as a charter member in 2012.

The academy endorses investigators at universities and non-profit research institutes who translate their research findings into inventions that benefit society.

Faculty who were initiated into the academy were:

Also honored were faculty members of the National Academy of Inventors who were awarded patents in the last year:

Matlock and Osborn founded BlueInGreen, a water-quality management company affiliated with the U of A, in 2004. They have since been awarded patents for a system and method of dissolving gases in fluids and for delivering dissolved gases to improve the quality of drinking water and wastewater.

Wickramasinghe, an Arkansas Research Alliance scholar, and Qian have been awarded a patent for magnetically responsive membranes that provide superior performance for applications such as treating wastewaters.

Di was awarded two patents in 2015 for designing advanced low-power integrated circuits that can function in battery-powered devices.

Henry was awarded a patent in 2015 for the invention of a protein that binds specifically to methamphetamine. The patent is licensed to InterveXion, a Little Rock-based company Henry co-founded with researchers at the University of Arkansas for Medical Sciences. InterveXion is developing the antibody as a therapy to treat methamphetamine addiction.

Naseem was awarded a patent in 2015 for a process to turn amorphous silicon into a high-quality crystal silicon for solar and LCD applications.