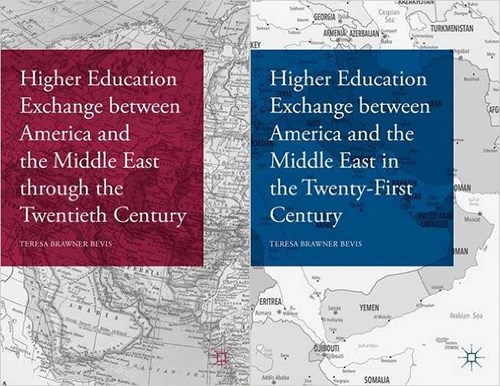 FAYETTEVILLE, Ark. – University of Arkansas graduate Teresa Bevis recently published two new books about the history and impact of education exchange between the United States and the Middle East.

Bevis is former program coordinator for U of A international students and now an adjunct professor at Crowder College in Neosho, Missouri. She spent several childhood years in Kuwait and always held an interest in Middle Eastern education.

Her first book, Higher Education Exchange between America and the Middle East through the Twentieth Century, explains the story from the onset of education exchange with the United States through the President Carter administration, the Iranian hostage crisis, and the impact on education that immediately followed.

Bevis' second book, Higher Education Exchange between America and the Middle East in the Twenty-First Century, also highlights the American education exchange through the turn of the millennium and documents the changes with the Middle East after the terrorist attacks of 9/11. Both were published by Palgrave Macmillan Publishing.

“It also reviews the remarkable growth of American study abroad in the Middle East since then and the continuing development of Middle Eastern studies programs in the United States,” she said.

Bevis received a unique view in the midst of publishing the two books. In her graduate years at the U of A, Bevis struck up a friendship with an Omani woman who introduced herself as Areej Zawawi. After doing work together for a semester, Bevis came across an article that identified Zawawi as Her Royal Highness Princess Areej Ghazi of Jordan.

"Years later, she explained that she rarely made her royal title known when she was in Fayetteville," Bevis said.

Both Bevis and Princess Areej earned their doctorates in higher education from the College of Education and Health Professions at the U of A, graduating in 2001.

Twelve years after their graduate work together, Bevis went to great lengths to try to contact Areej to tell her about writing two new books. Bevis said that for the next two years they collaborated online, on the phone and in person. Areej's husband, Prince Ghazi bin Muhammad of Jordan, also assisted Bevis with her research and offered dozens of valuable suggestions on Islamic and Arabic history.

After collaborating with her fellow classmate, Bevis published her two books in 2016. Princess Areej wrote an endorsement on the back of the first book stating:

“This is a brilliant and first-of-its-kind study on a crucial subject. To my knowledge no one has done any serious historical work on assessing the cumulative effect of the educational exchanges between America and the Middle East. Yet this information holds out hope for international harmony. I congratulate my friend and colleague Teresa Brawner Bevis on this great initiative.”