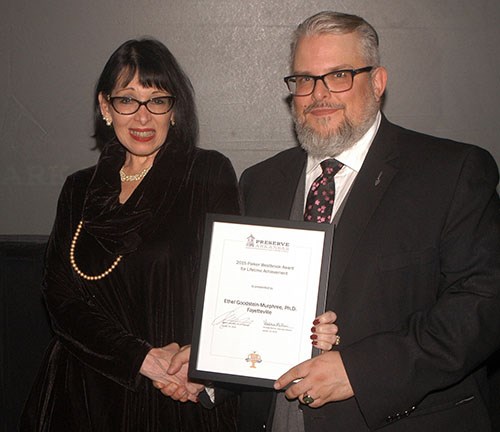 Ethel Goodstein-Murphree, associate dean and professor of architecture in the Fay Jones School of Architecture and Design, is shown at the awards event with Jamie C. Brandon, who is president of the Preserve Arkansas board of directors and an archeologist with the Arkansas Archeological Survey.

LITTLE ROCK — A professor and associate dean in the Fay Jones School of Architecture and Design at the University of Arkansas has been recognized by Preserve Arkansas for a career dedicated to educating and fostering an appreciation for historic architecture and the importance of its preservation among students in the design professions.

Ethel Goodstein-Murphree, associate dean and professor of architecture, was awarded the Parker Westbrook Award for Lifetime Achievement in the 2015 Arkansas Preservation Awards, Preserve Arkansas' only award for achievement in preservation over a period of years. She was among several individuals and organizations honored earlier this month for projects focused on historic preservation, advocacy and education throughout the state. Honorees and guests celebrated with a Jan. 15 reception and banquet at the Albert Pike Masonic Center, followed by a program recognizing award-winning projects and individuals.

Preserve Arkansas works to build stronger communities by reconnecting Arkansans to their heritage and empowering people to save and rehabilitate historic places. The Arkansas Preservation Awards have been given each year since 1981 to recognize important work being done to preserve and protect places of historic or cultural importance.

The Parker Westbrook Award recognizes Goodstein-Murphree's contributions in the classroom; through research and publications on the history of American architecture, particularly on the subject of mid-century modern design; to special projects, including the University's acquisition of the Fay and Gus Jones House; and with her service on historic district commissions in Arkansas and Louisiana as well as on the Preserve Arkansas board of directors.

"Ethel Goodstein-Murphree is an insightful scholar, an energetic lecturer, a consummate academic leader and a true colleague — but her passionate advocacy of the values of cultural and architectural history distinguish her in our school, in the state of Arkansas and across the nation," said Peter MacKeith, dean of the Fay Jones School. "This award and recognition by Preserve Arkansas is richly deserved and the entire Fay Jones School joins me in congratulating her."

A University of Arkansas faculty member since 1992, Goodstein-Murphree has been engaged in architectural education and practice for more than four decades. Prior to joining the University of Arkansas, she practiced architecture in New York City (when she concluded that her interests and talents were far better suited to adaptively using existing buildings than creating new ones), served as architectural historian for the Arkansas Historic Preservation Program, and began her career in architectural education at the University of Louisiana at Lafayette, where she taught for 10 years. Building a preservation ethic into the training of all architects and designers has long been a touchstone for her teaching. The legitimacy of any preservation activity, she argues, is tied to the integrity and authority of the architectural historical arguments that make the case.

In accepting the Parker Westbrook Award, Goodstein-Murphree reflected on the challenges of historic preservation advocacy and practice. "I am from Fayetteville, where in spite of its world-class concentration of mid-century modern treasures, there remains in the community an affection for a classical legacy that has little to do with our own sense of place; I advocate 'smart preservation' that negotiates carefully between protecting the buildings and cultural landscapes of the past while stewarding best practices in contemporary design; and, of course, I teach young women and men who aspire to be 'starchitects,' and, initially, are loathe to understand their own work in the context of an ever-evolving history of the made environment."

A specialist in American architectural and cultural history, Goodstein-Murphree remains active in research focused on mid-century modernism, the controversies surrounding its preservation, and the importance of placing women in the mainstream of its chronicle. Recent scholarly projects of note include Clean Lines, Open Spaces: A View of Mid-Century Modern Architecture, a regional Emmy-award winning public television (AETN) documentary for which she served as architectural historical consultant and co-author; "The Common Place of the Common Carrier: The American  Truck Stop," an essay in the anthology Visual Merchandising: The Image of Selling, from Ashgate Press (June 2013), for which she is the recipient of the Southeast Society of Architectural Historians Publication Award; and the "Nature and Humanity in a Simple Shed, The Pinecote Pavilion," in the forthcoming, Shadow Patterns, The Architecture of Fay Jones, to be released by University of Arkansas Press next year. Preserve Arkansas previously recognized Goodstein-Murphree with its Ned Shank Award for Outstanding Preservation Publication in 2011.

In addition, Of the Soil: Photographs of Vernacular Architecture and Stories of Changing Times in Arkansas, by author and photographer Geoff Winningham, was recognized at the awards ceremony with the Ned Shank Award for Outstanding Preservation Publication. The book was published by the University of Arkansas Press, through a collaborative publishing venture with the Fay Jones School.

A full list and details of the awardees from the 2015 Arkansas Preservation Awards are available on PreserveArkansas.org.

For more information about Preserve Arkansas or questions about the Arkansas Preservation Awards, contact Vanessa McKuin at 501-372-4757, vmckuin@preservearkansas.org, or visit PreserveArkansas.org.