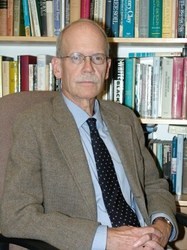 FAYETTEVILLE, Ark. – Mark E. Neely Jr., the McCabe Greer Professor in the American Civil War Era at the Pennsylvania State University, will present “Abraham Lincoln and the Constitution” at 5 p.m. Tuesday, Oct. 14, in Giffels Auditorium. The event is free and open to the public and is part of the Hartman Hotz Lectures in Law and Liberal Arts series.

Neely is a Pulitzer Prize winner and an authority on civil liberties during the American Civil War. He is a U.S. political and constitutional historian, who works mainly on the period 1787-1877 with a concentration on Abraham Lincoln and the Civil War.

His books include The Fate of Liberty: Abraham Lincoln and Civil Liberties (1991), for which he received the 1992 Pulitzer Prize for History, Lincoln and the Triumph of the Nation: Constitutional Conflict in the American Civil War (2011), The Civil War and the Limits of Destruction (2007), The Boundaries of American Political Culture in the Civil War Era (2005), The Union Divided: Party Conflict in the Civil War North (2002), Southern Rights: Political Prisoners and the Myth of Confederate Constitutionalism (1999), The Last Best Hope of Earth: Abraham Lincoln and the Promise of America (1993), The Abraham Lincoln Encyclopedia (1981) and several other co-authored books.

Neely earned a Bachelor of Arts in American studies in 1966 and a doctorate in history in 1973, both from Yale University. He received an honorary degree from Indiana University in 1995. He directed the Lincoln Museum at Fort Wayne, Indiana, for nearly 20 years before returning to academia at Saint Louis University in 1992. He joined the faculty of Pennsylvania State University in 1998.