U of A Student Named 'Miss Cherokee,' Will Serve as Goodwill Ambassador for Cherokee Nation 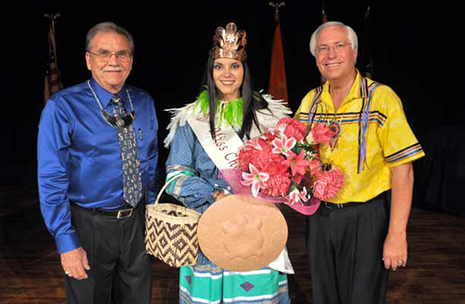 TAHLEQUAH, Okla. —University of Arkansas senior Sunday Plumb of Tahlequah was named the new Miss Cherokee at a leadership competition held Saturday, Aug. 23, at Cornerstone Fellowship Church in Tahlequah. During the competition Plumb placed a special emphasis on her desire to work to increase the number of Native Americans attending and graduating from college.

Plumb, 21, is an animal sciences major in the Dale Bumpers College of Agricultural, Food and Life Sciences. She is a member of the Native American Student Association and volunteers for Girls Scouts of America. She is the daughter of Loyal and Susan Plumb.

As Miss Cherokee, Plumb receives a $3,000 scholarship and will represent the Cherokee Nation as a goodwill ambassador for the next year, promoting the government, history, language and culture of the Cherokee people. The Cherokee Nation is the largest tribal nation in the United States, with more than 300,000 citizens.

We here in the Department of Animal Science congratulate Sunday on this well-deserved honor,” said Michael Looper, head of the department. “Her attitude toward mentoring fellow students strongly represents the philosophies of the Department of Animal Science, as well as Bumpers College. We applaud Sunday’s choice to lead by example while encouraging others to continue their education.”

The Miss Cherokee Leadership Competition judges contestants based on their use of the Cherokee language, cultural and platform presentations, and impromptu interviews.

“It was such an honor to compete with all of these women,” Plumb said after being crowned. “I truly believe every single one of them would be an awesome candidate, but I’m really excited I won. It’s such an awesome feeling to be able to represent the Cherokee Nation as Miss Cherokee.”

Plumb’s hobbies include gathering traditional foods, shooting blow guns, weaving baskets and making Cherokee tear dresses. For her cultural presentation, she performed a detailed explanation of the history and cultural significance of the tear dress.

Her platform presentation addressed the issue of low graduation and retention rates of Native Americans in college compared to other ethnicities. She wants to start a program that gives current Cherokee college students the ability to speak to high school juniors and seniors about what they can expect in a college environment, both socially and academically.

For Plumb’s impromptu question, judges asked, “If you could start a project that would change the lives of Cherokee youth, what would it look like?”

“I really want to get started on my Cherokee college retention initiative,” Plumb answered the judges. “I want to start mentoring students as soon as possible, so we can further assist to ensure the academic success of our Cherokee students.”

Plumb was featured on KTUL Channel 8’s Good Day Tulsa on Monday morning and will make a public appearance at Saturday’s State of the Nation Address at the 62nd Cherokee National Holiday this Labor Day weekend.