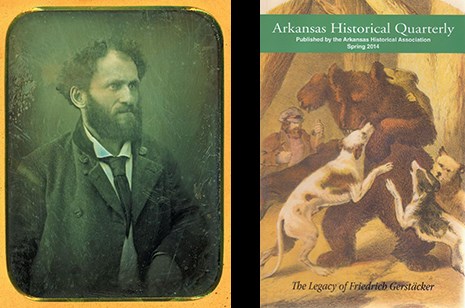 FAYETTEVILLE, Ark. – Adventurers and writers traversed Arkansas during its pioneering years. A special themed issue of the Arkansas Historical Quarterly focuses on one of them, Friedrich Gerstäcker, a19th century observer who wrote accounts of the new state’s people and descriptions of its fauna and flora.

Gerstäcker was a German hunter, traveler and writer who explored Arkansas from 1838 to 1842 and returned briefly in 1867. The few writers who came before him wrote primarily either fiction or scientific observations of the state’s natural history and generally described Arkansas’ inhabitants as crude, lazy, ignorant and violent.

“In Friedrich Gerstäcker, Arkansas got a new kind of visitor,” wrote Robert Cochran, who contributed to the Quarterly. “An observer capable of understanding and appreciating the resourcefulness that allowed the frontier settlements to survive and grow. He stayed with the people he met long enough to view them as friends, not as representative of a generalized class of humanity — there’s nothing even approaching this intimacy in other accounts.”

Gerstacker wrote in a number of genres and was a popular figure in 19th century German adventure and travel literature. Many Germans romanticized the American frontier and the people who lived there, but the Arkansas-themed adventure novels Gerstäcker wrote for German audiences could be realistic and informative, even when romantic in tone. His writings also included his insights into antebellum Arkansas’ sizable but relatively unstudied German immigrant community.

Other contributors were Jeffrey Sammons of Yale University, Wolfgang Hochbruck of the University of Freiburg and John Pizer of Louisiana State University.

The spring 2014 issue of Arkansas Historical Quarterly, titled “The Legacy of Friedrich Gerstäcker,” features nearly all of the presentations made at a conference held at the University of Arkansas in October 2012 that was supported by the Center of Arkansas and Regional Studies, the D.A.A.D. (Germanic Academic Exchange Service), the Office of the Provost and Vice Chancellor for Academic Affairs, the J. William Fulbright College of Arts and Sciences dean’s office and the departments of history and world languages.