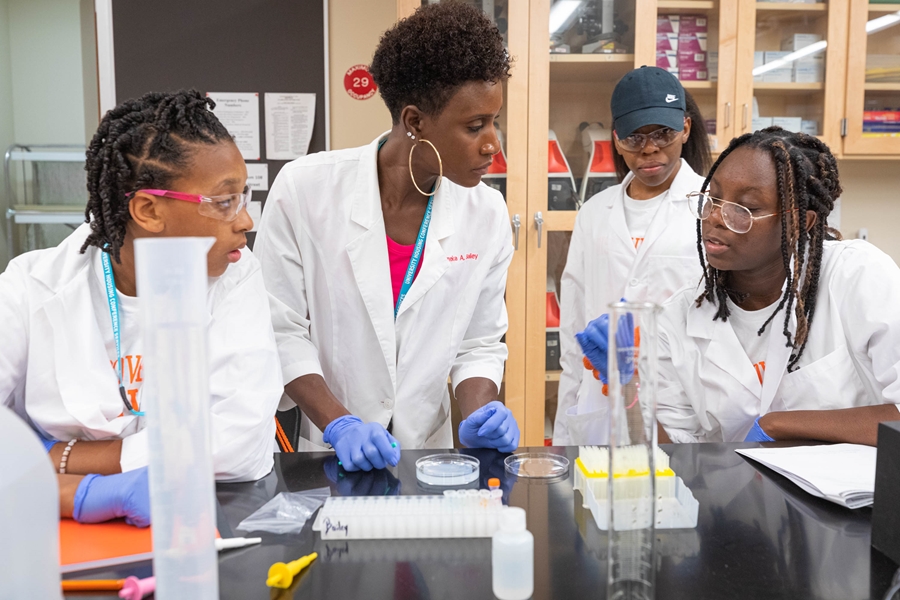 Tameka Bailey, center, talks with students at a lab.

The Science Education Partnership Award program awarded the U of A $1.25 million to support STEAM education (science, technology, engineering, art and math) for underrepresented students.

The five-year grant will be used to introduce and advance opportunities to engage in the STEAM fields for both students and teachers. Tameka Bailey, an assistant professor of biological sciences, is the grant’s project director. This is the first time the university has received a grant from the Science Education Partnership, which is sponsored by the National Institute of General Medical Sciences, a component of the National Institutes of Health.

People of color are underrepresented in STEAM education and careers, often due to gender, socioeconomic and cultural factors. Early access to, and success in, STEAM classes is often a predictor in whether students will pursue a STEAM major and eventual career. As such, getting students engaged, interested and thinking about STEAM disciplines early is critical to nurturing a lifelong pursuit.

A key component of the grant is a one-week STEAM summer program at the U of A. The program targets rising sixth graders from Reed Elementary in Dumas, which is largely rural, low-resource and African American.

The program has three primary goals:

“As an underrepresented minority within the STEM disciplines, it’s very important to me that we change the demographic — the representation that’s within those disciplines,” Bailey said. “I want to connect the two communities — my home in Fayetteville and my native home of Gould and Dumas. For me, growing up, opportunity was everything. Had I not been exposed to STEM very early on, I would not have become a research scientist.”

She added studies show that around the fifth grade students decide what they’re going to be in life. The earlier that students are exposed to the STEAM disciplines, the more likely they will study those disciplines. “And by exposing them to the University of Arkansas, the more likely they are to attend the University of Arkansas. So, we want to put the university at the top of their radar.”

This grant represents a significant advancement of the university’s diversity, equity and inclusion efforts. Yvette Murphy-Erby, the vice chancellor of diversity, equity and inclusion, noted the grant reflects the university’s community-based effort that “aligns perfectly with our land-grant, academic and research missions, focuses on STEAM education and preparation for post-secondary education success, and targets an underserved community in the state that is in need of much support.”

She added, “Dr. Bailey is from the community, and it was her vision that started the camp and her willingness to collaborate with others on campus to broaden the effort in this meaningful, innovative and difference making way.”