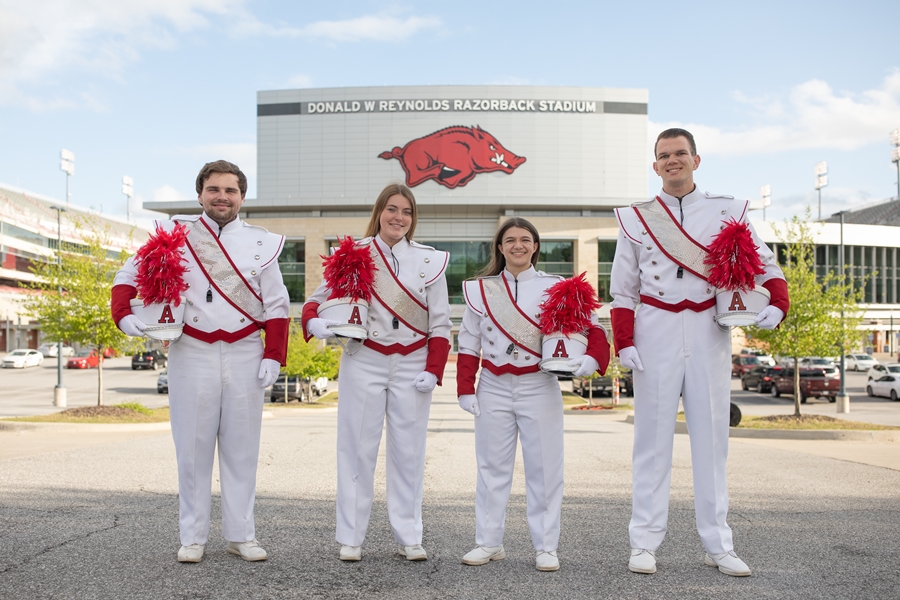 Four drum majors for the Fall 2022 edition of the Razorback Marching Band will be leading the ensemble when the football team faces Cincinnati on Saturday, Sept. 3. Sallie Hendrix from Paragould, William Rowe from Conway, Jenna Wheeler of Van Buren and Doug Harnish of Sapulpa, Oklahoma, have been selected as this year's drum majors.

In addition to serving as the student leaders of the Razorback Marching Band, the drum majors will play an active role in helping coordinate rehearsals. They will conduct the halftime and exhibition performances and often conduct in the stands at games. Drum majors are also actively involved in the coordination of campus and community performances.

Chase Jones, interim assistant director of the Razorback Marching Band, was impressed with the group during the band's leadership camp held on campus Aug. 5-7. Jones, himself a drum major from 2009-2011, said, "This group has already put a lot of effort into the upcoming year, holding late night Zoom chats, teaching marching fundamentals to section leaders and helping with plans for all aspects of band operations."

Auditions for the four spots were held during the spring semester. "It spanned several weeks," said Jeff Summers, interim director of the Razorback Marching Band, of the audition process. "It included interviews, marching and music auditions, as well as teaching and conducting demonstrations. Throughout each aspect of the audition, these four students demonstrated exceptional talent and leadership."

Sallie Hendrix is a saxophone player who is also majoring in music education. Hendrix is a junior and will serve as head drum major.

"I am incredibly honored to have the privilege of serving another year as a drum major for the Razorback Marching Band. This past year has been formative for the RMB with the return of many traditions and the establishment of several new ones. I am proud of our performance this past season, and I am very optimistic for next season! Next year holds many opportunities for our ensemble, and we could not be more excited! We are proud to continue a tradition of excellence in the RMB, and we hope that you see our passion for music, marching and the University of Arkansas in every performance."

Senior Doug Harnish will be in his fourth year as a member of the Razorback Marching Band, though this will be his first as drum major. He is a music education major who plays the trombone.

"I am so honored to be able to serve the RMB again for my final year. The pure grit this ensemble has shown the past two years dealing with the pandemic shows that no matter the challenges, the Razorback Marching Band always pushes through and thrives. That's what makes this organization so special. I am proud to be a part of such an incredible ensemble and cannot wait to spend my final year serving the band in this role."

William Rowe, a senior mechanical engineer and trumpet player, is also a first time drum major for his senior year.

"I am extremely honored to be a drum major for the RMB this coming season. The spirit and culture of the marching band is very special to me, and I'm so excited to have this leadership opportunity. I have cherished every moment in this program so far and I can't wait to see what this year has in store."

Jenna Wheeler plays bassoon and is a music education major. She is currently a senior and has held various leadership positions in the band leading up to her fourth year in the ensemble.

"I am extremely excited to be getting to serve on the leadership team for a third year. The Razorback Marching band has given me so many incredible opportunities and experiences, and I can't wait to see what all we accomplish this season!"

About the University of Arkansas Bands: The University of Arkansas Bands Program, part of the Department of Music in the Fulbright College of Arts and Sciences, began in 1874 and is one of the oldest band programs in the country. The program has seven ensembles including the Razorback Marching Band, Hogwild Band and five concert bands with over 400 student members representing every college at the university.