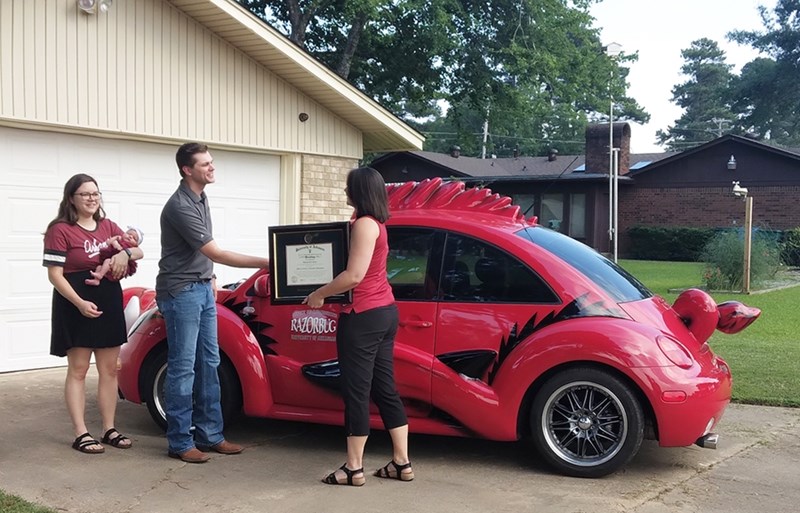 Dakotah Cooper, center, shakes hands with Megan Whobrey of the College of Engineering as his wife, Natalie, looks on.

Dakotah Cooper of Magnolia became a father two days after the U of A's spring commencement, so he was not able to walk at the ceremony in Fayetteville. More than 440 students who studied in online degree programs applied for graduation in May.

Baby Piper joined Cooper and his wife, Natalie, in a different ceremony Wednesday in Magnolia where he was presented his framed diploma for a Master of Science in Operations Management in front of the U of A's RazorBug.

Cooper studied online, meaning he did not have to move his growing family and leave his job as a chemical engineer to earn a graduate degree from the U of A. He had earned his bachelor's degree in chemical engineering from Southern Arkansas University in Magnolia in 2018.

"This is a cool experience," Cooper said as the RazorBug drove into place and the small group assembled with a camera crew to witness his accomplishment. The heat was sweltering in south Arkansas even as the day moved into evening. "I didn't get a chance to walk at graduation, so to still be presented my diploma is cool."

U of A faculty and staff members traveled throughout south Arkansas last week to present diplomas to some of the recent graduates who earned degrees in online programs. Megan Whobrey, adviser and academic services coordinator in the U of A's College of Engineering, drove from Fayetteville to present Cooper his diploma.

Cooper and his wife were both first-generation college students and both now have master's degrees. They hope to be role models for daughter Piper, and maybe someday she'll earn a doctorate.

He said he had already received a promotion at work since earning the degree, and he believes having it opens additional opportunities in his future.

"The program is really flexible," he said. "The eight-week courses mean that you're not overloaded. I came home after work and did my assignments."

The most difficult aspect of studying online for a graduate degree was the time that had passed since earning his bachelor's degree in 2018, Cooper said.

Cooper, who grew up at Greenbrier, said as an Arkansas resident he has always felt like a Razorback.

The RazorBug is a converted red Volkswagen beetle that sports a Razorback snout, tail and razor-edged spine. It has been used for recruitment and special events since 2005. It continues the RazorBug Diploma Tour with stops in the River Valley this week.

The tour was organized by the U of A's Global Campus. For more information about U of A ONLINE, please visit online.uark.edu.