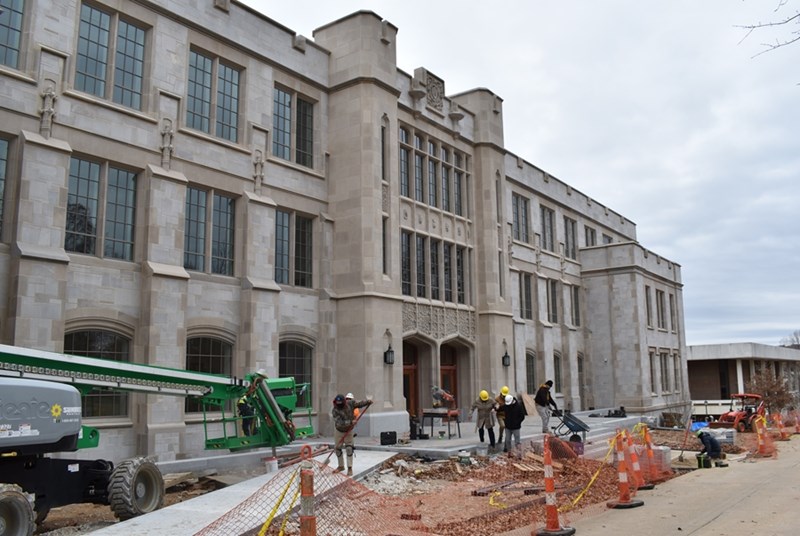 FAYETTEVILLE, Ark. – The new Student Success Center, scheduled to open in January 2022, is in its final stages of construction. Over the next few weeks, the final touches are being added in preparation for the spring semester.

Landscaping around the site of the new facility will continue this week, including trees tentatively scheduled to for installation on Wednesday and Thursday. Campus Drive will remain open during this work, and flaggers will be onsite to assist with traffic. However, those in the area should use extra caution. Fencing is also being removed from the job site surrounding the new center.

Starting the week of Dec. 13, the Silas Hunt memorial statue will be returned to its original location at the corner of the new facility. The statue was removed prior to the construction of the Student Success Center for its protection and was stored offsite. Bryan Massey, the sculptor, will return to campus to oversee its installation.

Furniture and IT hookups are currently being installed inside the new center with the third and fourth floors nearly complete. New occupants for the building are tentatively scheduled to move in during the first few weeks of January.

Work will be scheduled around Dead Day and campus quiet hours as to not disrupt studying for finals.

The University of Arkansas became the first major Southern public university to admit a Black student when Silas Hunt of Texarkana, an African American veteran of World War II, was admitted to the university's School of Law in 1948.

Roy Wilkins, administrator of the NAACP, wrote in 1950 that Arkansas was the "very first of the Southern states to accept the new trend without fighting a delaying action or attempting to ... limit, if not nullify, bare compliance." Silas Hunt Hall, across from the law school, was dedicated in his honor as the student admissions center in 1993.

Although admitted without incident, Hunt's experiences were not that of the average student. Hunt attended segregated classes in the basement of the School of Law. However, white students were not restricted from taking these classes and a few attended with Hunt on a regular basis. Hunt's pursuit of a law degree was unfortunately cut short by illness and he passed away in 1949.