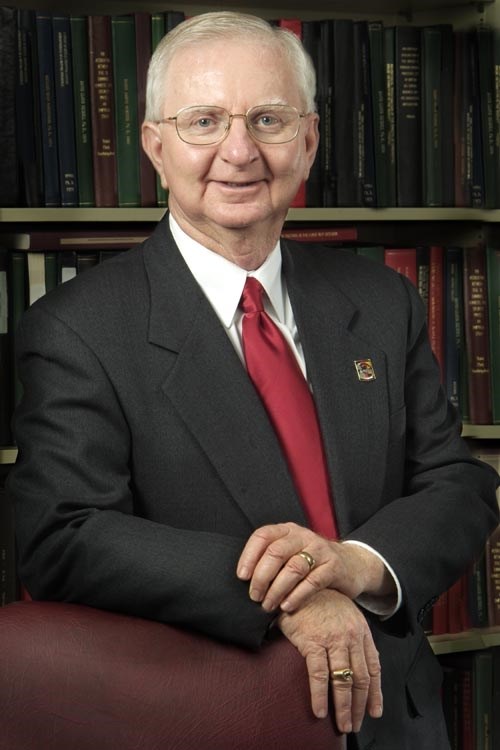 Doyle Zane Williams, former dean of the Sam M. Walton College of Business, passed away Sept. 29 in Silver Spring, Maryland. He was 81.

"Doyle Williams had an everlasting influence on Walton College, the University of Arkansas and the state," said Matthew A. Waller, dean of the Walton College. "Because of his leadership, Walton College received a transformational grant, which propelled our college into one of the top business schools in the nation. He helped set the foundation for even larger grants for the university. These gifts have benefitted an untold number of students, faculty and staff. He was an amazing leader and mentor. He will be missed."

Williams served as dean of Walton College from 1993 through 2005. During his tenure, Walton College received a $50 million gift in 1998 from the Walton Family Charitable Support Foundation — at the time, the largest cash gift given to a U.S. business college — which boosted the college's national rankings, attracted faculty, established research centers and upgraded classroom technology. The gift has had a lasting impact on the college's rankings and national reputation.

In the same year, the college created its Graduate School of Business to manage its master's and Ph.D. programs. It also opened the Donald W. Reynolds Center for Enterprise Development, adjacent to the business administration building.

In 1999, the college was ranked by U.S. News & World Report as 48th in the nation for public undergraduate business schools. The college's rankings rose to 36th in 2000 and 28th in 2003. Most recently, Walton College was ranked 24th in public undergraduate business schools by U.S. News & World Report for the 2022 listing.

With Williams' leadership, the college launched the Arkansas Business Hall of Fame in 1999 to recognize business leadership within the state, opened the Office of Diversity and Inclusion — now known as the Dr. Barbara A. Lofton Office of Diversity & Inclusion — in 1994, and launched the Center for Business and Economic Research's annual Business Forecast Luncheon - an event to highlight the economic forecasts within the state, nation and world - in 1994.

As an accounting professor, Williams began his academic career at Texas Tech University in 1965. After a brief stint in New York where he worked for the American Institute of Certified Public Accountants, Williams returned to Texas Tech to teach and eventually became the department chair. In 1978, Williams became the dean of the School of Accounting for the University of Southern California and served as the interim dean of the USC School of Business Administration from 1986-1988. In 1993, he became the dean at Walton College. Upon his retirement from the University of Arkansas in 2005, he was named Dean Emeritus of the Walton College and the university endowed a $1.5 million chair in his and Maynette's honor.  After retiring from Walton College, Williams served as a senior scholar at Kennesaw State University in Georgia. From 2008 to 2012, he served as executive director of the Accounting Doctoral Scholars Program for the American Institute of CPAs Foundation.