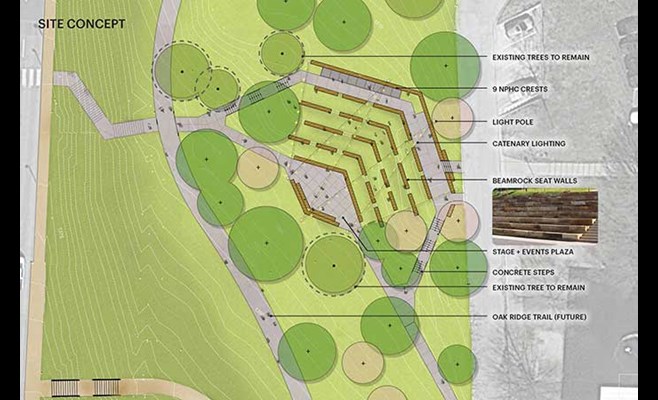 Site concept drawing of the NHPC Gardens by Olin. 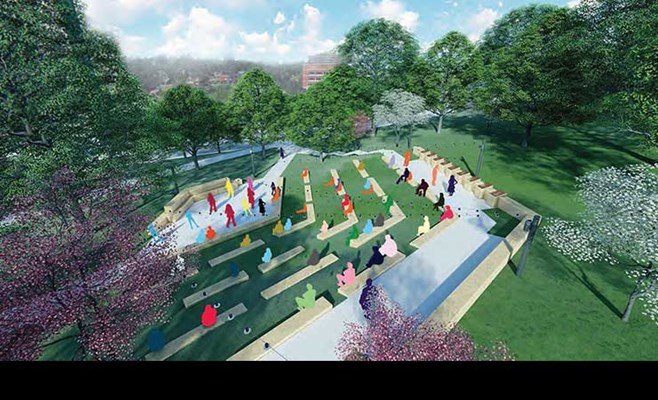 An aerial view depicts the plaza, to be south of the Administration Building.. 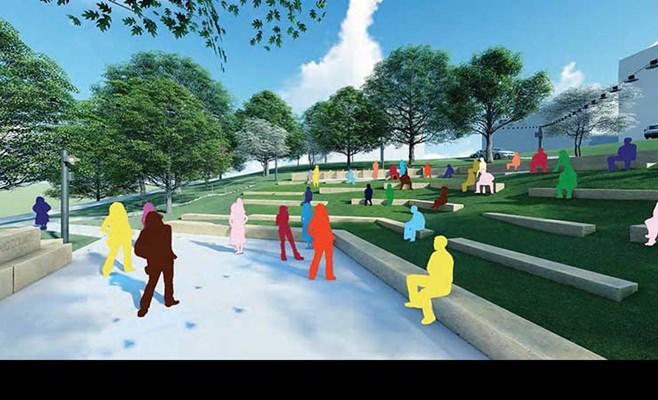 The stage and events plaza are shown in a concept plan of the NHPC Gardens. 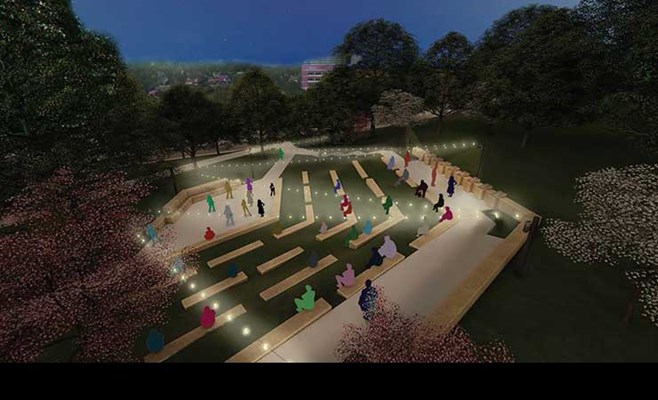 A night view of the plaza at the NHPC Gardens is seen from above. 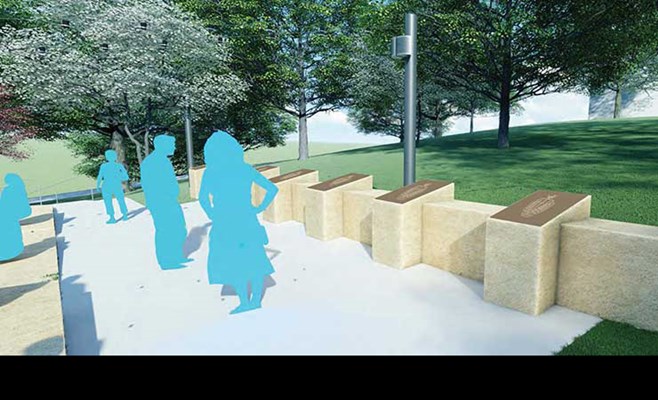 A daytime site concept drawing by Olin Studio depicts the National Pan-Hellenic Council Gardens and plaza, to be dedicated Oct. 16.

Former Razorback football standout Deatrich Wise, Jr., first noticed tributes to underrepresented students while visiting other university campuses during away games. He wondered if the U of A would consider something similar for Black Greek students, then spoke to others about the idea, and several years later, with lots of help from other students, his vision is becoming a reality.

The university will dedicate the NPHC Gardens Saturday, Oct. 16, at 9 a.m. The Razorbacks' homecoming football game against Auburn will follow, with kickoff scheduled for 11 a.m. Parking information can be found on ArkansasRazorbacks.com.

"To current NPHC students, this is the space for us, a space that we can call our own, where we can create memories, fellowship, unity and relationships that will last for a lifetime," Wise said. "Allow this space to be a place to honor the ones who came before us and the ones to come after. Let this plot be filled with fun, happiness and positive experiences at all times."

The NPHC Gardens, located south of the Administration Building and overlooking Razorback Stadium, will serve as a monument, commemorating the rich heritage of the National Pan-Hellenic Council and the historically Black fraternities and sororities at the U of A.

"As an undergraduate student, there was a lack of representation for the Black Greek culture on campus," Wise said. "I wanted something to represent our history and culture, but also have a plot to showcase who we are as Black fraternities and sororities. This design is beautiful and well thought out. This will forever be brilliant."

The area will include large, rectangular stones for seating, centered around a lighted stage, embedded into the hillside.

"It is not just a gathering place, but it is a place for our Black sororities and fraternities to call their own," Parice Bowser, assistant vice chancellor for Greek life and associate dean of students, said. "It's a place to build community. A place to be a community. A place to program, educate, but most importantly, a place of belonging as members of The Divine Nine — The National Pan-Hellenic Council at the University of Arkansas.

"I can't wait until everyone sees it for the first time and then begins to use it moving forward."

Wise, now in his fifth season in the NFL with the New England Patriots, is a two-time Super Bowl champion. He won't be able to attend the dedication during the season but looks forward to visiting the gardens in person soon.

"To me the most exciting part about the gardens is the fact that NPHC organizations on this campus have a place to gather with our organization's name on it," said Madison Russell, president of NPHC and a member of Alpha Kappa Alpha. "It means a lot to have a place that is 'ours' that we can share with the campus community. The garden also illustrates the intersectionality we experience as Razorback students and NPHC members, and I believe there is no better place for that than directly across from Donald W. Reynolds Stadium. Not only do we have a space, but it is a space we can be proud of in a prime location."

While Wise originated the idea as a member of the Iota Tau Chapter of Kappa Alpha Psi Fraternity, fellow Greeks and fellow students continued the momentum after he departed for the NFL.

Other Greek leaders wrote letters of support and/or participated in numerous discussions to select an architect along with designing the project.

"Rachel Jackson (AKA), J'Lynn Lowery (AKA), Nik Harper (Kappa), Ahmere Albert (Kappa), Delayne Coleman (AKA) and Khalil Buckmire (Phi Beta Sigma) all worked tirelessly on this project," Bowser said. "All these students are recent graduates and served as NPHC president or council officers during their undergraduate career. They helped get us where we are today.

"And I would also like to recognize and thank Charles Robinson, interim chancellor; Melissa Rom, interim vice chancellor of student affairs and dean of students; our facilties management team; and Olin Studio, our design team, for their support throughout the process."

All are also invited to an open house from 3-5 p.m., Friday, Oct. 15, at the Unity House, located at 1002 W. Maple St., just east of the intersection of Garland Avenue and Maple Street.

The Unity House will provide a space where traditionally unhoused Greek chapters whose membership is primarily minority-based can meet in a welcoming atmosphere near the center of campus.

"Many of our underrepresented Greek organizations do not have a house on campus and have been in need of a go-to space for fellowship, community and day-to-day chapter operations," Bowser said. "Space for these activities was one of several needs Greek Life identified that would assist us in our quest to become a premier student success model for Greek communities across the country. With the Unity House, we can enhance our ability to provide leadership opportunities and experiences for our chapters. We're thankful and excited that the university provided the space to make that happen with the Unity House."

After the completition of a remodeling project set to begin next year, the National Pan-Hellenic Council, the United Greek Council and its member organizations will have a place to gather and host educational and social programming. The space will provide each of these organizations with an individual office and storage area for leadership growth and engagement. To promote personal growth and student success, members will also be able to use the space for private study space, tutoring, group projects and student success workshops.

Originally, the building was the Delta Gamma sorority house. When the sorority left campus in 1992, it turned the building over to the university. The university's development office then occupied the facility for nearly 30 years. Greek Life began managing the building on Aug. 1, 2021. 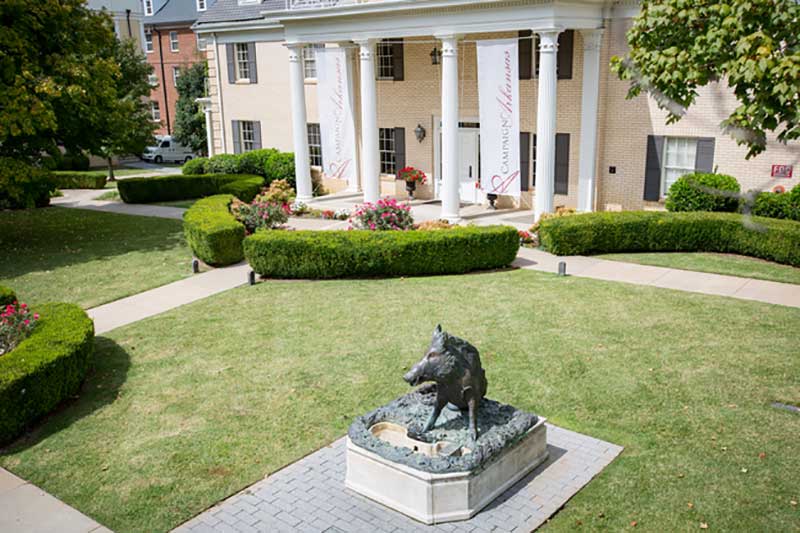