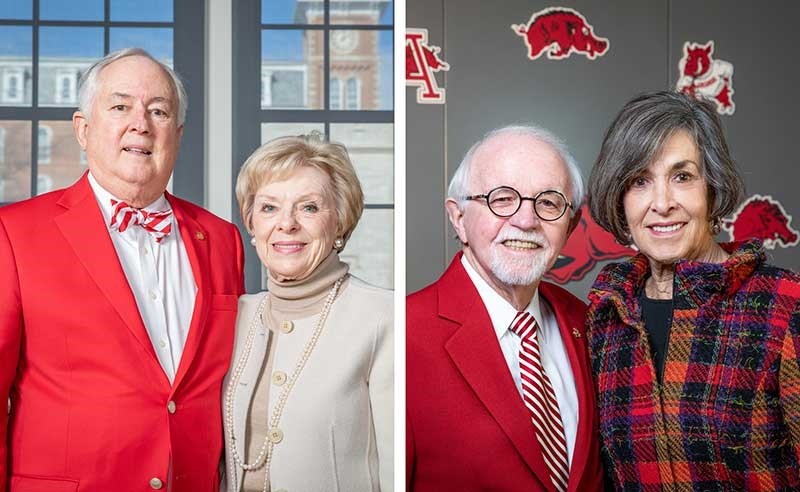 Jim and Pat Jim McClelland and Dick and Nancy Trammel.

FAYETTEVILLE, Ark. – University of Arkansas benefactors and volunteers Pat and Jim McClelland and Dick and Nancy Trammel were recognized as Chancellor’s Medal recipients at a small outdoor ceremony for the university’s Towers of Old Main event on Sept. 10.

They were honored alongside 40 other benefactors whose cumulative giving or commitment to the university reached or exceeded $100,000. The private ceremony featured harpist and alumna Devanee Williams and provided an opportunity for alumni and friends to gather and reflect on the importance of philanthropy at the university.

Pat and Jim McClelland were named Chancellor’s Medal recipients because of their steadfast support of higher education at the U of A and their passion for volunteering and helping students succeed.

Jim grew up in Fayetteville, while Pat grew up in Little Rock. The two met and married while they were students at the university and were both active in Greek life as members of Sigma Nu and Zeta Tau Alpha. Jim graduated from the College of Engineering with a Bachelor of Science in Civil Engineering in 1967.

Upon graduation, Jim worked for Mehlburger Engineers for 10 years, before opening a branch of his father’s company, McClelland Consulting Engineers Inc. in Little Rock. When his father retired in 1986, Jim moved the headquarters to Little Rock and led the company until 2009. He is now the retired chairman emeritus. Over the past 58 years, the company has employed and apprenticed more than 200 engineering students from the U of A.

Pat was a founding board member of the Susan G. Komen Breast Cancer Foundation - Arkansas affiliate and was the first race co-chair. She is very involved with Arkansas Children’s Hospital and was elected chair of the hospital’s Board of Directors in 2006. She now serves on both the Little Rock and Northwest Arkansas Boards of Directors for Children’s.

At the university, the McClellands are both included in the Chancellor’s Society, are life members of the Arkansas Alumni Association and are recognized as Thoroughreds for their consecutive years of giving. They were active members of the Central Arkansas committee during the Campaign for the Twenty-First Century and established the J.E. and Maurice A. McClelland Endowed Scholarship in Civil Engineering, along with Jim’s brother and sister, Raymond McClelland and Linda Rogers. The fund was named in honor of Jim’s father, who graduated from the university in 1940, and his mother. Thanks to their support, the scholarship has continued to grow and has benefited more than 50 civil engineering students over the last 24 years. The McClellands have also supported the Civil Engineering Research and Education Center at the U of A, most recently with a $100,000 gift.

Pat and Jim have been married for 56 years and have two sons, James E. McClelland III and Kirk F. McClelland, who are also U of A graduates. They are proud grandparents of two grandchildren, Sophie and Nick.

Charles Robinson, interim chancellor, said, “Pat and Jim have been loyal supporters of the University of Arkansas for many years and have been vocal champions of higher education. They are beloved not only by the College of Engineering but the entire university as a whole. We are grateful for the opportunity to honor them with the Chancellor’s Medal and recognize them for the many ways they have made a difference on our campus.”

Dick and Nancy Trammel were honored with the Chancellor’s Medal because of their energetic volunteerism and love for supporting education at the University of Arkansas.

Dick is a native of Pocahontas and a 1960 graduate of the U of A with a Bachelor of Science in Business Administration. At the university, he was a cheerleader with the Spirit Squad, a member of ROTC and a Sigma Chi.

After graduation, Dick returned to his hometown and was active in the cotton gin and grain elevator business before becoming a founding director and vice president of Planters and Stockmen Bank. In 1975, he moved to Rogers to become a vice president of First National Bank & Trust Company after being offered a job by the late Sam Walton. It later became Arvest Bank. After 43 years of service, Dick retired from Arvest Bank – Benton County at the end of 2018 as an executive vice president and community and business relations advisor. He is still a member of the board of directors.

Dick serves on the advisory board for the University of Arkansas for Medical Sciences Northwest campus in Fayetteville and is a board member for the Rogers-Lowell Area Chamber of Commerce, Northwest Arkansas Community College Foundation, The Cancer Challenge and the U.S. Marshals Museum Foundation. He is also a past president of the Rotary Club of Rogers and was a founding director, director emeritus and past chairman of the board for the Northwest Arkansas Radiation Therapy Institute in Springdale.

He was appointed to the Arkansas State Highway Commission in 2009 and retired in January 2019. In honor of his 10-year term on the commission, a 30-mile section of Arkansas 265 was named the Dick Trammel Highway.

Nancy grew up in Northeast Arkansas and spent more than 43 years in banking. Her career included time with Regions Bank in Rogers and Simmons First Bank in Little Rock. She is an active volunteer in the Northwest Arkansas community and has served on the boards of the Single Parent Scholarship Fund of Benton County, the Rogers Public Library Foundation, the Botanical Garden of the Ozarks, the Haas Hall Academy in Fayetteville and on the campaign committee for the Northwest Arkansas Nonprofit Center. She is also involved with Women With a Mission, the Susan Barrett Giving Society associated with Mercy Health Foundation.

In 2018, the Trammels created the Dick and Nancy Trammel Endowed Razorback Cheerleading Scholarship, specifically for students involved with the Spirit Squad. They are also supporters of the Chancellor’s Society and are counted as Thoroughreds for their 27 years of consecutive giving to the university. They are both members of the Arkansas Alumni Association, and Dick has been a member since his graduation in 1960.

Robinson said, “Dick and Nancy are some of the most engaged volunteers I’ve had the pleasure of meeting. They live and breathe Razorback spirit. They also have a wonderful history of ensuring that students have the funds needed to stay in school and graduate. We are incredibly fortunate for their decades of support and are excited to recognize them as Chancellor’s Medal recipients.”