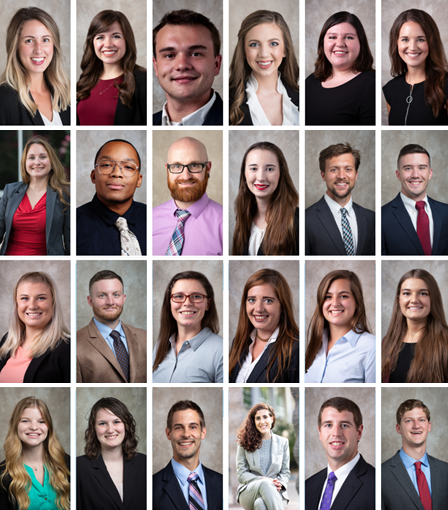 From left: Law students pictured in the order of names as they appear in the story.

As part of a long-standing tradition, the U of A School of Law presented more than 20 graduate awards to the class of 2021 in a virtual ceremony on June 8. The recipients of Latin honors were also recognized.

Each award was created to honor members of the law school community who have excelled in a particular area of endeavor. The awards are endowed, or are funded by, benefactors with important ties to the School of Law.

Awards include the three students with the top scores in the class along with internal and external acknowledgments of academic excellence, pro bono hours provided while in law school and service to the school and community.

"We are incredibly proud of these students who have worked so hard and remained dedicated to educational excellence in an unprecedented and difficult year," said Margaret Sova McCabe, dean of the law school. "We are also grateful to our alumni and friends whose generous contributions made this celebration a possibility."

Bell was also the recipient of the Joe C. Barrett Commercial Law Award and the Erron and Libby Smith Award for Outstanding Contribution to the Law School Publications Award.