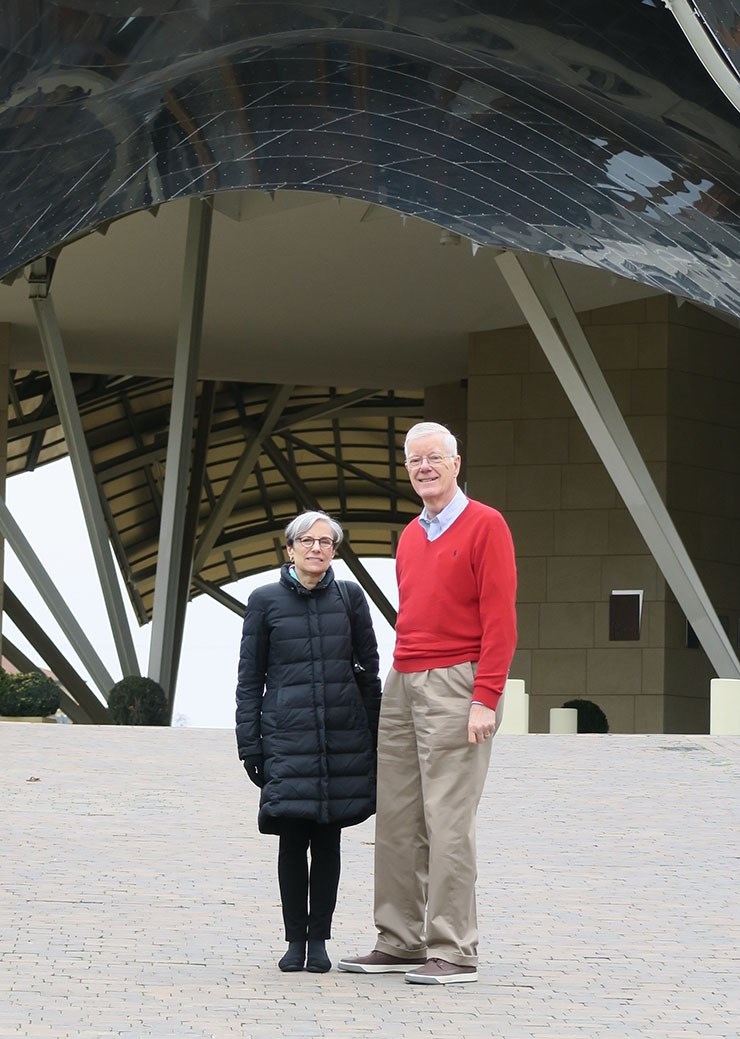 John and Carol Mott in front of the Frank Gehry-designed hotel in Elciego, Spain.

U of A alumnus John Mott has made a $500,000 planned gift to enrich students’ international experiences in the Fay Jones School of Architecture and Design. The John K. and Carol Baer Mott Endowment for the Enrichment of the Student International Experience will help students extend their international travel experiences and provide them with the opportunity and financial resources to make the most out of their time abroad.

“I think international experiences are broadening and valuable – not just for architecture students but for any student,” Mott said. “It’s an opportunity to see other places, most of which are older than the U.S., to see how other people live and to gain experience that one will remember for the rest of his or her life.”

Eligible students must be enrolled full-time in a professional program in architecture, landscape architecture or interior design; demonstrate financial need; and be entering their fourth or fifth year of the program. Students enrolled in one of the school’s general programs in the U of A Rome Center or whose extended experience includes Rome as a destination will receive first consideration.

Mott grew up in Fort Smith, and since his father was an architect, Mott began working at his office at an early age. This introduction inspired him to study architecture at the U of A, where he graduated with a Bachelor of Architecture in 1960 and was a member of Sigma Alpha Epsilon fraternity.

“Because of the Fay Jones School and because of the fraternity I joined, I have had a network of friends across the state that could never be replaced,” Mott said.

After graduation, Mott joined his father’s firm as the clerk of the works on the construction of Humphreys Hall, a residence hall on the U of A campus.

In 1962, he joined the U.S. Navy and attended Naval Officers Candidate School in Newport, Rhode Island. In 1968, after serving overseas on Guam and Okinawa and working as the assistant public works officer at Treasure Island Naval Station in San Francisco Bay, Mott rejoined his father’s firm. For the next 25 years, he worked on many projects involving the U of A, including the Health, Physical Education and Recreation Building, Bud Walton Arena, the restoration of Old Main and the renovation of Barnhill Arena.

During those 25 years, Mott became increasingly interested in historic preservation, which led to a position with one of the country’s leading preservation firms in Washington, D.C. Since then, Mott has had the opportunity to work all over the country on some of the nation’s landmark buildings with John Milner Associates Inc.

With the firm, Mott has done preservation work on three occasions for Vol Walker Hall, home to the Fay Jones School. This included exterior stone restoration in the early 2000s, followed shortly by interior renovations, addition of fire stairs and additions to the third floor. Most recently, he served as preservation consultant to Marlon Blackwell Architects during the renovation and addition to the building in 2010-2012.

Mott’s journeys with the Navy and his profession amplified his childhood love for travel and inspired him to create the John K. and Carol Baer Mott Endowment for the Enrichment of the Student International Experience.

“I believe it’s important to have experiences beyond just the Arkansas region,” Mott said, noting that he has been to almost 20 different countries in his life.

The endowment will provide financial assistance to students enrolled in the Fay Jones School with the goal of extending their international travel experience beyond the school-required study abroad semester. It will also enrich and contribute to the overall student performance by making available opportunities and experiences that further develop tangible skills and critical thinking that prepares them for life and careers after graduation.

“I believe the cost of a semester abroad is a challenge to many families and that the individual student might have a difficult time affording some of the opportunities that would make the trip a real experience,” Mott said. “To me, it’s beyond just being able to afford to go to a place like Rome to study architecture. Once in Europe, I’m hoping this endowment will be able to provide students with some additional time to see the continent when their semester ends. In my opinion, the experience I’ve gained just by traveling through other countries is something I can never replace. What I hope is that this will allow some students to gain these experiences earlier in life rather than having to wait as long as I have.”

“John Mott has been a valued alumnus for the Fay Jones School for many years, and has become an important counselor for me as dean,” said Dean Peter MacKeith. “His commitments to not only historic preservation and the importance of preservation design, but moreover to the value of international experience as part of a curriculum in architecture and design, demonstrate his foresight for the school and the profession. As we emerge from the pandemic conditions and begin to venture forward again into international study with our students, the Motts’ generosity will be of invaluable assistance. On behalf of the school, I offer our sincere and lasting gratitude to John and Carol for their commitment and support.”

John Mott, a Fellow of the American Institute of Architects, is a member of the Fay Jones School’s Dean’s Circle. He and his wife, Carol, are members of the Arkansas Alumni Association, are counted as Thoroughreds for their 28 years of consecutive giving and are included in the Towers of Old Main, a giving society for the university’s most generous benefactors.