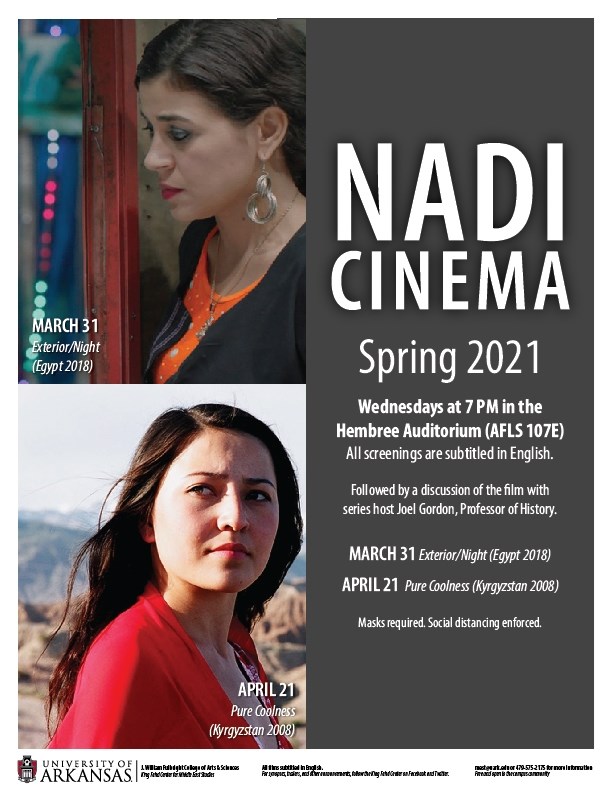 Nadi Cinema Lives! After a year-long hiatus, the Middle East Film Club is returning to campus this month for a limited‐edition release. The club, shuttered since last March, will resume screenings in Hembree Auditorium in compliance with the University of Arkansas' COVID‐19 events policy. Masking will be required, and social distancing enforced.

According to professor of history Joel Gordon, host of the series for over a decade, the renewed series this spring will not venture into the 'dark corners' of filmmaking. "We all need to laugh a bit — together — not to avoid the harsh realities of everyday life, but to recognize that those harsh realities may also be treated with a degree of levity."

From Turkey to Palestine, Iran to India, Nadi Cinema introduces viewers to the storytelling and vision of filmmakers across North Africa and the Middle East. All films — classics, cult favorites, recent hits, comedies, tragedies, political thrillers, social commentaries, and romances, in black-white and living color — are subtitled in English.

All screenings are free and open to the campus community, and take place at 7 p.m. in the Hembree Auditorium, room 107E in the Agricultural Food and Life Science building (AFLS), next to the Pat Walker Health Center on Maple Street. Metered parking is available nearby at the Garland Avenue Parking Garage.

A frustrated film director facing personal and professional disappointment spends a raucous night with a taxi driver and a call girl. Reminiscent of Martin Scorsese's After Hours, but with a sardonic glimpse at contemporary, post‐Arab Spring Egypt. (Arabic with English subtitles 98 minutes.)

Assema, a city girl, accompanies her boyfriend to his village to meet his parents, rejecting warnings about the prevalence of bride kidnapping in the countryside. Will the inevitable happen? (Kyrgyz with English subtitles, 95 minutes.)