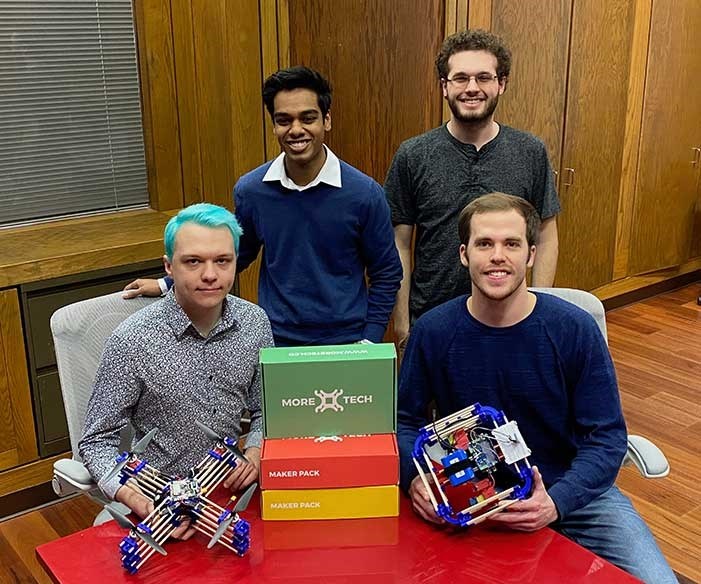 FAYETTEVILLE, Ark. – MORE Technologies, a startup company founded by four University of Arkansas students specializing in the sale of 3-D printable robots, recently sold its technology assets and patent to Sphero, a company based in Boulder, Colorado, that makes programmable robots and educational tools based in science, technology, engineering, arts and mathematics fields — or the STEAM fields.

MORE Technologies — the acronym stands for Modular Open-source Robotics Ecosystem — was the brainchild of Canon Reeves, company CEO and U of A undergraduate in computer science.

Reeves' interest in creating educational robots was inspired by a time when he built a robot with his younger sister, but he became frustrated by the limitations of current robot kits on the market. Once the construction was completed, the learning stopped.

His aspiration was to take students beyond the assembly of robots and become creators of their own technology. This meant the design needed to be modular — as students learned, the designs could become more complex, incorporating more ambitious structures, electronics and computer programming.

The idea for MORE Technologies didn't really come together until Reeves participated in Startup Weekend in 2018, hosted by Startup Junkie and held at the U of A Brewer Family Entrepreneurship Hub. Also participating were cofounders, Peyton Smith, a management and finance major, and Rex Hearn, a biomedical engineering major. Over the course of 48 hours they formed a team, pitched ideas, hammered out a business plan and built a prototype robot, then presented their proposal. Their pitch took 1st place.

As Smith explained, "We had 75 preorders by the end of the weekend, and that's when we realized, 'Hey, we might be on to something.' The Monday after that, we were ready to shift gears and start MORE technologies."

Smith subsequently became the chief operating officer, and Hearn stepped in as chief technology officer. The final cofounder, Kaushik Ramini, a mechanical engineering major, soon joined as chief manufacturing officer. (Smith and Hearn are now both graduates while Reeves and Ramini are still pursuing their degrees.)

Working initially out of the U of A Brewer Family Entrepreneurship Hub and, since the fall of 2019, at the U of A Startup Village, the company has grown quickly.

"We sold kits to over 23 countries and 25 states. We have a 3-D print farm of twelve 3-D printers that we ran around the clock to produce our parts," Reeves explained.

The acquisition of MORE’s technology and patents by Sphero will be a dramatic change, though. "It's like pouring gas on a fire," Smith said.

“We are excited to bring MORE’s technology and patent on board at Sphero as we continue to innovate and bring new educational products to classrooms around the world,” said Paul Copioli, CEO of Sphero. “What the MORE team has created is truly phenomenal and will further add to our mission of inspiring the creators of tomorrow.”

The MORE Technologies founders will also transition to being employees of Sphero — something they look forward to.

"We had a farm of 3-D printers that really worked well with the amount of capital we had," Reeves elaborated. "Now they're going to be manufacturing with injection molds in China. Part of our role coming on [to Sphero] is to essentially redesign everything we've developed. Make it better, make it for mass manufacturing, and then scale up and launch."

Reeves is relieved he won't have to pitch investors anymore. "There's people who are a lot more qualified and will have a lot more expertise," he said. "The product is changing, and so with that we, as engineers and business people, are learning new skills and just being exposed to larger companies."

The founders are quick to credit U of A-related mentors, professor and advisors who guided them through the process, whether through classes or workshops, including Mark Zweig, Tim Riley and Rogelio Garcia-Contreras. "Sarah Goforth was just a life changer to work with," Reeves said, referring to the executive director of the Office for Entrepreneurship and Innovation.

Smith underscored how much local support there was: "The entrepreneur community in Northwest Arkansas was just incredibly receptive of us. They treated us as if we were a serious company." He went on to say, "I don't think there's a better place for someone to start a venture than Northwest Arkansas. As a student at the U of A. It's cheap, and there's so many resources. I think it's a great place to get started."

While the sale of MORE Technologies is a great story for its four founders, Goforth thinks there's more to that story. "The strength of the entrepreneurial community in Northwest Arkansas is just that — it's a community," she said. "Canon, Peyton, Kaushik and Rex have always taken advantage of the opportunities and services available inside the university and across the state, but they are also great contributors. As they learned, they taught; as their business grew, they brought on interns and mentored other students; as their needs changed, they helped us design new ways of serving all student entrepreneurs. Other students see their example and think, maybe I'll go for it."

About Sphero: Sphero inspires the creators of tomorrow through remarkably cool, programmable robots, electronic building blocks, and educational tools that transform the way kids learn and create through coding, science, music and the arts. Sphero goes #BeyondCode and drives kids to turn their imagination into reality. The skills students unlock through play-based learning prepare them to thrive, no matter what subject or career they pursue. Based in Boulder, Colorado, Sphero, with its family of products including littleBits, has become the No. 1 STEAM-based learning solutions company, loved by millions of parents, kids and educators worldwide. Learn more at sphero.com.