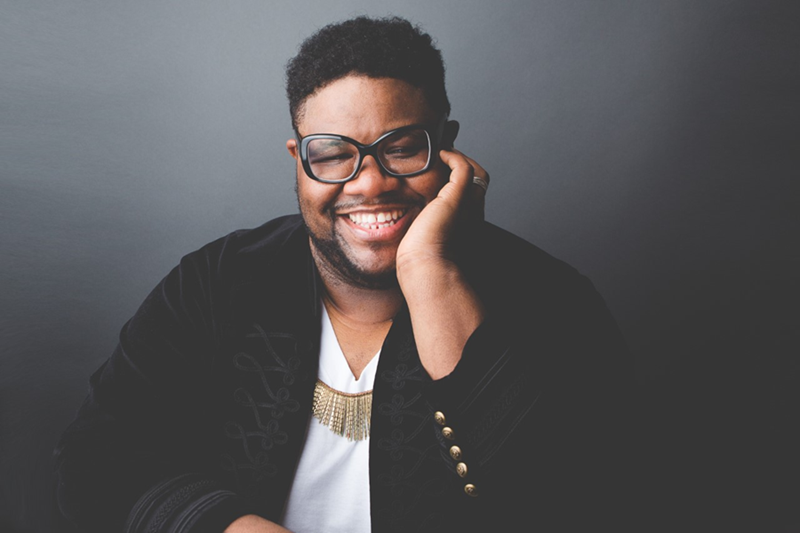 The Department of English welcomes professor Eric Darnell Pritchard as a new member of its faculty and as the new Brown Chair in English Literacy for the University of Arkansas.

The position of Brown Chair was previously held by professor emeritus in English David Jolliffe.

While Pritchard was not very familiar with Arkansas before moving here, they had visited Arkansas several times previously, first coming to the state in 2007, as a graduate student, to attend the Feminisms and Rhetorics Conference in Little Rock.

Pritchard traveled twice more to the Natural State while interviewing Black LGBTQ+ people across the country to learn about their literacy lives. That research resulted in Pritchard's first book, Fashioning Lives: Black Queers and the Politics of Literacy, published by Southern Illinois University Press and released in 2016. Fashioning Lives has received three book prizes from two national academic organizations.

Arriving most recently in Arkansas to move here and join the U of A community, Pritchard has found their immediate opportunities to get to know the area to be rather limited due to the COVID-19 pandemic.

Nonetheless, they've managed to explore Northwest Arkansas a bit, checking out the holiday lights in Fayetteville and Bentonville, enjoying walks on the local trails, and getting takeout to support local restaurants. They and their family enjoy the local cuisine.

"That is not surprising though," said Pritchard. "This is the South, folks know how to season well."

Stepping into the role of Brown Chair in English Literacy, Pritchard plans to focus upon encouraging literacy language and practice throughout the state of Arkansas and beyond.

Pritchard sees the role of Brown Chair, which supports community literacies, as "the center of a constellation connecting the university, and especially the College of Arts and Sciences and English Department, to our neighbors, to the entire state, to the interdisciplinary field of Literacy Studies, and to our many partners in literacy activism, nationally and internationally."

Pritchard already plans to launch a number of specific programs that would be informed by community-accountable Black queer feminist literacies, as well as guided by a key set of ethics: love, justice, imagination, and community.

The specific programs that Pritchard hopes to implement, based upon the above foundational ideas, would fall into one of four main categories: research, education, advocacy, and empowerment.

One of the main programs Pritchard will create is the Arkansas Literacy Lab (ALL), which will promote literacy research by students, faculty, and organizers. Such work would then translate into projects with a broad impact. In addition, the ALL would facilitate partnerships with the local Marshallese and Latinx communities, along with organizations concerned with the preservation and dissemination of information about Arkansas's African American, LGBTQ+, and feminist histories.

"I will, as I get to know Arkansas, and the great work people are already doing, be on the lookout for such partnerships," said Pritchard, "but I am very much hoping potential partners will reach out to me as well."

A more long-term initiative that Pritchard is considering is the development of a Community Writing Center that would extend across Arkansas and even include a mobile component, allowing the center's staff to "travel all over the state and do pop-up events in conjunction with educators, nonprofit organizations, agriculture workers, and in various industries," explained Pritchard. The mobile component is inspired by the Black Feminist Bookmobile, a project based in Durham, North Carolina, and founded by Alexis Pauline Gumbs, Sangodare Akinwale, and Courtney Reid-Eaton. Arkansas students, faculty, and administrators who are interested in community-education-related service or teaching would be welcome to participate in the Community Writing Center.

In addition to serving as Brown Chair, Pritchard will be teaching Rhetoric, Composition, and Literacy courses for the Department of English. Some of their currently planned graduate classes include "Anti-Racist Writing Pedagogies," "Community Literacies," "Rhetoric and Popular Culture," "Black Feminist Rhetorics," "Queer Literacies and Pedagogies," "Critical Hip Hop Studies," and "Literacy Education and American Film." Since Pritchard is also a scholar in Fashion Studies, they likewise hope to offer a graduate seminar on "Fashion Rhetorics." Their anticipated undergraduate courses include a class on Black expressive culture, "The Language of Black Freedom," as well as courses such as "Queer of Color Film" and "The Politics of Fashion and Beauty."

Along with serving as Brown Chair and teaching, Pritchard will be continuing to research, write, and publish. Pritchard's Fashioning Lives was the first book-length study to draw connections between race and queerness in literacy, composition, and rhetoric.

"In the book I look at the, sadly, many ways literacy is used to inflict harm, ... prompt[ing] Black LGBTQ+ people to ensure their own survival by repurposing literacy through literacy performances fueled by accountability to self and communal love towards social and political change."

A current book project that Pritchard is working on examines the life of fashion designer Patrick Kelly, "a Black queer man, born and raised in the small, segregated city of Vicksburg, Mississippi, who grew up to establish one of the hottest fashion labels in Paris."

Pritchard first saw Kelly on television when Pritchard was nine. As Pritchard grew up and launched their own career—first as a journalist and then as an academic—they were surprised that no biography of Kelly had yet been written.

"Given that my purpose, again, is to document, preserve, share, and celebrate Black queer life, culture, and history, I felt it was imperative that I pursue my interest in Kelly and write what, I hope, will be the definitive biography of this trailblazing figure."

On top of everything else they are doing, Pritchard is regularly being consulted as a leading authority on the history of fashion in the U.S., and especially as the topic pertains to Black designers. In just the past month, for example, Pritchard has been quoted in The Guardian for an article about Vice-President Harris and Black designers as well as an article on an upcoming exhibition of Patrick Kelly's work, and also featured in Nylon magazine for a piece on Black culture's most influential fashion moments.

But life isn't all work for Pritchard. When asked what they were most looking forward to later in 2021 (and hopefully after COVID has subsided), Pritchard said that they would be excited to receive a visit from family members—in particular, their five nieces and nephews. "It will be nice to get to see the state through their eyes, and I have begun to make a list of fun things we can do when they visit."

Getting back into a movie theater to "experience a film the way [it] ought to be experienced" is another goal.

"It would not be an exaggeration to say I would go to the movie theater about once a week," admitted Pritchard. "I cannot wait to just go see a movie again."