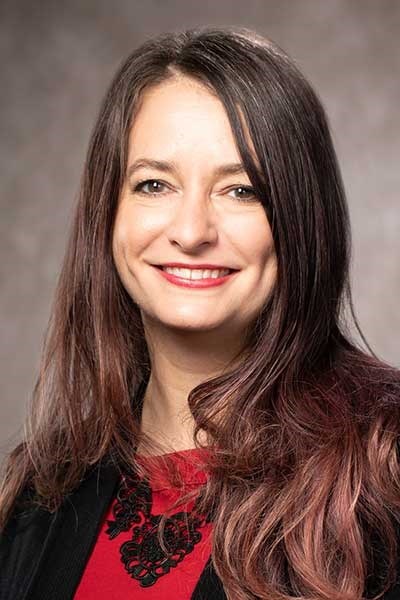 Lissette Lopez Szwydky; below: cover image for "Transmedia Adaptation in the Nineteenth Century."

Why are so many films, television shows, plays, graphic novels, fiction, and other works of art based on other storytelling sources? Why is it that everywhere you turn you will find adaptations, sequels, prequels, extensions, and parodies of both old and new works?

A new book by Lissette Lopez Szwydky, associate professor of English and associate director of the Arkansas Humanities Center, shows us how our cultural fascination with adaptation and similar practices like transmedia storytelling are central to the history of storytelling.

Szwydky's Transmedia Adaptation in the Nineteenth Century (published by Ohio State University Press in 2020) traces the roots of today's adaptation-driven entertainment industry back more than 200 years. The book uncovers the historical interworkings of an extensive network of writers, artists, adapters, and producers in order to explain and better understand how and why today's arts, culture, and entertainment industries feature so many productions based on other works. The book features extensive discussion of examples from well-known nineteenth-century works, authors, and artists including Mary Shelley's Frankenstein and its extensive adaptation history, celebrity writers like Lord Byron and Victor Hugo, the many works of Charles Dickens, Victorian versions of the legends of Camelot, and many nineteenth-century visual artists including William Blake, Gustave Doré, and Julia Margaret Cameron. 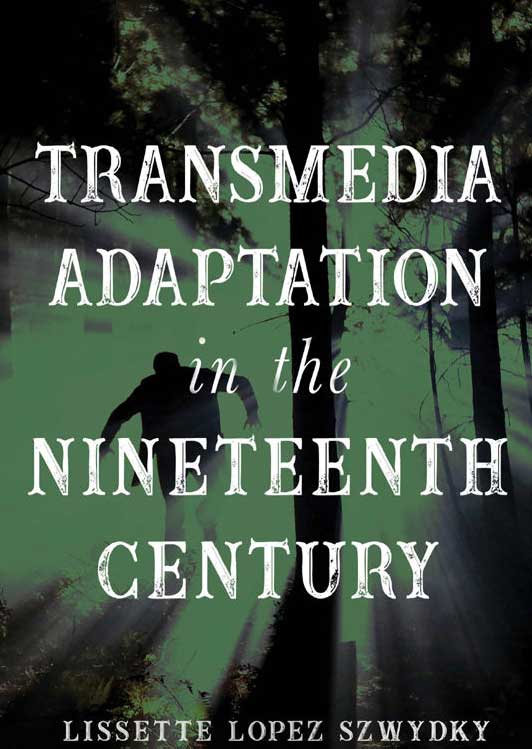 Transmedia Adaptation in the Nineteenth Century also includes discussions of the many forms and media that adaptation has taken throughout history (such as plays, parodies, illustration, toys, and other tie-in merchandise) and how those early adaptation practices continue to influence contemporary works of art and entertainment. Examples cover a range of disciplines including literature, film and media history, art history, theater history, and the commercial industries that have supported these art forms and mediums since the late eighteenth century.

"On behalf the entire English department, I am happy to applaud the exceptional achievement of Dr. Lissette Lopez Szwydky’s recent publication of Transmedia Adaptation in the Nineteenth Century," said Department Chair William Quinn. "Her ongoing, interdisciplinary, multi-media research on adaptation studies promises to make a major contribution to cultural studies in general."

Szwydky discussed specific examples and main takeaways from Transmedia Adaptation in the Nineteenth Century on a recent episode of the New Books Network podcast.

Adaptation studies and nineteenth-century literature and culture are cornerstones of Szwydky's research, teaching, and public-facing work. She is currently working on a book on the figure of the female Frankenstein creature titled Frankenstein's Bride: A Transmedia Cultural History of Her Own. She is also currently co-editing a collection of essays with Dr. Glenn Jellenik (associate professor of English at the University of Central Arkansas) titled Adaptation Before Cinema: Literary and Visual Convergence from the Middle Ages through the Nineteenth Century.

Szwydky joined the University of Arkansas faculty in fall 2013 and was tenured and promoted in 2020. She teaches various courses for the English Department that incorporate adaptation studies, including: "Frankenstein: A Transmedia Cultural History," "Gothic Adaptations," and "19th Century Women Adapted." She also teaches courses to help prepare arts and humanities students for a diverse range of careers. Szwydky also co-directs (with Sean Connors, associate professor of English Education) a summer institute for K-12 educators funded by the National Endowment for the Humanities titled "Remaking Monsters and Heroines: Adapting Classic Literature for Contemporary Audiences," which will run for the second time in June 2021. You can follow her work on Twitter @LissetteSz.