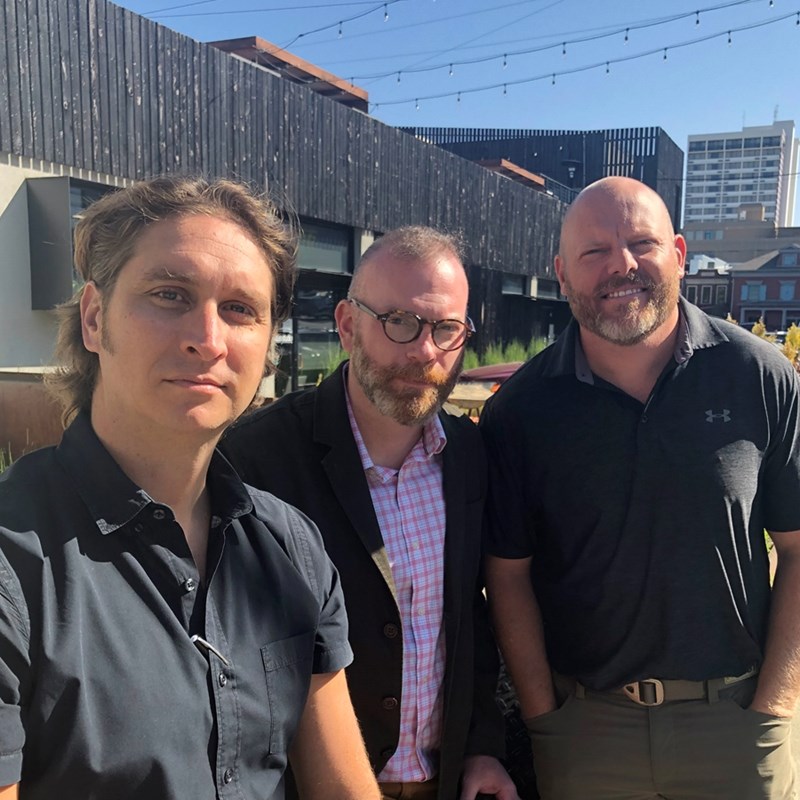 Modus Studio in Fayetteville is contributing $250,000 to the Fay Jones School of Architecture and Design at the University of Arkansas to support the construction of the Anthony Timberlands Center for Design and Materials Innovation.

In recognition of their gift, the seminar and conference room in the center will be known as the Modus Studio Seminar and Conference Room, subject to the approval of the chancellor and the Board of Trustees at the University of Arkansas.

Their gift counted in Campaign Arkansas, the university’s recently concluded capital campaign that raised nearly $1.45 billion to advance academic opportunity at the U of A.

Modus Studio is also one of the architects for the Anthony Timberlands Center, which is currently under design, working in partnership with Grafton Architects of Dublin, Ireland, the 2020 Pritzker Architecture Prize recipients.

Chris Baribeau, principal and co-founder of the company, said, “Modus believes in the purpose of the Fay Jones School to expand the design, research and fabrication capacity of current and future students who will ultimately become our allies in the effort of improving the built environment.”

“The new center truly puts tangible investments to work for the potential impact of new technology in the architecture and construction industry,” Baribeau said. “‘Putting your money where your mouth is’ sends a powerful signal to the state, nation and world about what design thinking can be.”

“Modus Studio epitomizes the excellence in architectural education and in the profession of architecture characteristic of ‘the next generation’ of Fay Jones School and Arkansas graduates,” said Peter MacKeith, dean of the school. “Their commitment to the school’s future, expressed through this gift to the Anthony Timberlands Center project, is a commitment to the coming ‘next generation’ of Fay Jones School students, as well as an emphatic reinforcement of a central tenet of a Fay Jones School education: the linking of creative thought to tangible, material construction. On behalf of the school, I am very grateful to Modus Studio, and in particular, to the Modus principals, Chris Baribeau, Jason Wright and Josh Siebert.”

Baribeau, who is a 2003 graduate of the Fay Jones School and served on the school’s Campaign Arkansas committee, says the company is proud of the school and the initiatives that have been undertaken by Dean MacKeith during his leadership.

“This new facility will expand the real potential of timber and other building materials in a focused way,” he said. “As architects, we know the actual value of this exploration, innovation and playfulness in the built environment.”

Modus Studio was founded in 2008 and is now a firm of 26 working in a self-developed and designed LEED Platinum certified architectural studio and fabrication shop. Baribeau’s fellow principals and Fay Jones School alumni, Jason Wright and Josh Siebert, graduated in 2004 and 2002, respectively.

Modus Studio was named an “Emerging Voice” by the Architectural League of New York in 2018, and the firm was selected as a top 50 architecture firm in the design category by Architect magazine in 2019. Also in 2019, their Evans Tree House project at Garvan Woodland Gardens received four national and regional awards and was a finalist in the Civic and Community Category at the World Architecture Festival.

Since 2014, Modus Studio has sponsored the Warren Segraves lecture in the Fay Jones School. The firm is also contributing custom-designed and fabricated furniture as an in-kind contribution to the Anthony Timberlands Center.