Videos of Keetoowah Band on Review for Anniversary of Tribal Recognition 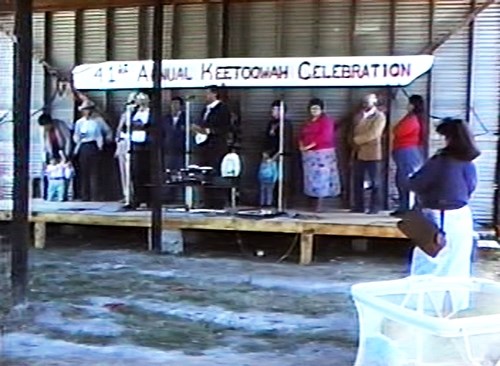 Members of the United Keetoowah Band's tribal council celebrate the 41st anniversary of federal recognition in 1991.

FAYETTEVILLE, Ark. – The United Keetoowah Band of Cherokee Indians in Oklahoma is reviewing a recently cataloged collection of rare recordings of Keetoowah council meetings and special events produced between 1987 and 2000.

The University of Arkansas Department of Communication is making the collection available to the UKB in commemoration of the 70th anniversary this Saturday of the Keetoowahs’ identification as a federally recognized tribe on Oct. 3, 1950.

“This is really great news!” said UKB Chief Joe Bunch. “It gives us an opportunity to learn from our past, to improve our present as well as our future. I am grateful to Dr. Frank Scheide for his foresight in creating this historical record and for his dedication to completing the task. Our thanks and gratitude also go to the University of Arkansas for their endorsement and support of the project.”

Scheide, a professor of communication at the U of A, first videotaped a 1987 Keetoowah council meeting for a documentary he was producing.

When Jimmie Lou Whitekiller, secretary of the United Keetoowah Band told Scheide in 1991 that she found taking minutes during the council meetings a challenge, he offered to videotape these public meetings for her to review. As a result, more than 160 videotapes documenting United Keetoowah Band history in the 1990s are now part of a video collection named after the late Jimmie Lou Whitekiller and her husband, Dave.

In 2018, Scheide contacted Ernestine Berry, director of the tribe’s John Hair Cultural Center and Museum in Tahlequah, about supporting a grant application to preserve videotapes of Indigenous American events, including those of the Keetoowahs, that Scheide and U of A students taped between 1984 and 2017.

Berry graciously agreed to support the project and on May 5, 2018, the Department of Communication received a University of Arkansas Arts and Humanities Seed Grant so that the “Dave and Jimmie Lou Whitekiller Indigenous American Video Collection” could be made accessible to scholars.

After receiving the initial grant, the Department of Communication funded completion of the preservation efforts, and Scheide is currently cataloging the collection.

“The United Keetoowah Band and the John Hair Cultural Center and Museum are grateful to the University of Arkansas and to Dr. Frank Scheide for preserving this portion of UKB history and making it available to the Keetoowah people as well as to others who may be interested,” said Berry. “It is especially appropriate on the 70th anniversary of the ratification vote to remember the many Keetoowah ancestors whose diligent labor extended over 15 years to re-establish the Keetoowah government,” Berry said.

Once the Keetoowahs have reviewed the collection, the U of A Department of Communication will work with the tribe in determining the best strategy for making these videos available to scholars.